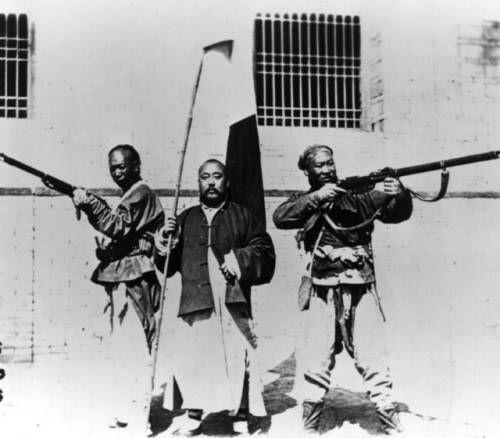 Who were the Boxers and why did they rebel?

Who were the Boxers and why did they rebel?

Boxer Rebellion, officially supported peasant uprising of 1900 that attempted to drive all foreigners from China. “Boxers” was a name that foreigners gave to a Chinese secret society known as the Yihequan (“Righteous and Harmonious Fists”). The group practiced certain boxing and calisthenic rituals in the belief that this made them invulnerable. It was thought to be an offshoot of the Eight Trigrams Society (Baguajiao), which had fomented rebellions against the Qing dynasty in the late 18th and early 19th centuries. Their original aim was the destruction of the dynasty and also of the Westerners who had a privileged position in China.

In the late 19th century, because of growing economic impoverishment, a series of unfortunate natural calamities, and unbridled foreign aggression in the area, the Boxers began to increase their strength in the provinces of North China. In 1898 conservative, antiforeign forces won control of the Chinese government and persuaded the Boxers to drop their opposition to the Qing dynasty and unite with it in destroying the foreigners.

The governor of the province of Shandong began to enroll Boxer bands as local militia groups, changing their name from Yihequan to Yihetuan (“Righteous and Harmonious Militia”), which sounded semiofficial. Many of the Qing officials at this time apparently began to believe that Boxer rituals actually did make them impervious to bullets, and, in spite of protests by the Western powers, they and Cixi, the ruling empress dowager, continued to encourage the group.

By May 1900, Boxer bands were roaming the countryside around the capital at Beijing. Finally, in early June an international relief force of some 2,100 men was dispatched from the northern port of Tianjin to Beijing. On June 13 the empress dowager ordered imperial forces to block the advance of the foreign troops, and the small relief column was turned back.

Meanwhile, in Beijing the Boxers burned churches and foreign residences and killed suspected Chinese Christians on sight. On June 17 the foreign powers seized the Dagu forts on the coast in order to restore access from Beijing to Tianjin. The next day the empress dowager ordered that all foreigners be killed. The German minister was murdered, and the other foreign ministers and their families and staff, together with hundreds of Chinese Christians, were besieged in their legation quarters and in the Roman Catholic cathedral in Beijing.

Imperial viceroys in the central Yangtze River (Chang Jiang) valley and in South China ignored government orders and suppressed antiforeign outbreaks in their jurisdiction. They thus helped establish the myth that the war was not the policy of the Chinese government but was a result of a native uprising in the northeast, the area to which the disorders were mainly confined.

An international force of some 19,000 troops was assembled, most of the soldiers coming from Japan and Russia but many also from Britain, the United States, France, Austria-Hungary, and Italy. On August 14, 1900, that force finally captured Beijing, relieving the foreigners and Christians besieged there since June 20. While foreign troops looted the capital, the empress dowager and her court fled westward to Xi’an in Shaanxi province, leaving behind a few imperial princes to conduct the negotiations. After extensive discussions, a protocol was finally signed in September 1901, ending the hostilities and providing for reparations to be made to the foreign powers.