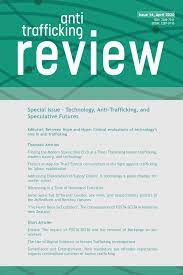 Labor Trafficking. Drawing upon the lecture and Denise Brennan’s book, what do we learn about how a restrictive immigration regime harms trafficked persons trying to seek assistance?

Drawing upon the lecture and Denise Brennan’s book, what do we learn about how a restrictive immigration regime harms trafficked persons trying to seek assistance? Why does it prevent them from leaving or reporting exploitative situations?

Although they had treated her fairly in Ecuador, the wife, explains Carmen, “turned into the devil” once they got to the United States.
They did not pay her, took her passport, forbade her from leaving the house, kept food from her, and forced her to sleep in the children’s room.

A neighbor suspected that Carmen was being held against her will and contacted the police. The police, aware that Carmen’s case
may qualify as “trafficking,” called a large social service provider whose social workers oversaw her care and whose lawyers began to put together Carmen’s application for a T visa. The U.S. Citizenship and Immigration Services (USCIS) eventually determined that Carmen had been “trafficked.”

After initially living in a domestic violence shelter, Carmen lived in a series of apartments that she shared with other migrants to the United States. Her daily concerns were like those of her migrant roommates working low-wage jobs: how to pay bills while also sending remittances to her parents; how to find time to attend ESL classes while she worked the night shift cleaning hotel

rooms; and how to make new friends so far from home. As someone who was designated “trafficked,” however, aspects of her life were different from those of her roommates. She enjoyed benefits they did not, such as eventual legal status through a T Visa, health care (for about a year), and the support of a case manager with whom she still stays in touch.

Yet, even with these benefits, Carmen and other T visa recipients still struggle. Like many migrants, they work in low-paying
can find with limited formal education, English-language skills, and social networks.

This Article, along with the larger book project of which it is a part, examines how individuals who have been in forced labor in the
United States rebuild their lives. This research focuses on the struggles and successes with the everyday tasks of resettlement of persons whom the U.S. government has officially recognized as having been trafficked.

It asks how these individuals, whose lives were controlled by violence or threats of violence, regain control of their lives and begin the process of resettlement in the United States. I explore ways in which they confront the same daily challenges in their resettlement as their fellow migrants as they build new lives in a new country.

Yet, I also ask how the intrinsic violence of trafficking into forced labor— which subjects individuals to a profound loss of control over their lives, including where and when they eat, sleep, and work—shapes the course of their resettlement.

While many formerly trafficked persons who experienced human rights abuses warily engage new situations and friends, the individuals I have met are committed to making a life in the United States and to crafting ways to improve the conditions of their lives and those of their families back in their home countries, albeit to different degrees and in different ways. Their interest in finding jobs soon after their escape or rescue is particularly striking. Formerly trafficked persons seek to work right away and strive to build new networks of friends and colleagues, behaviors that challenge the simplistic media portray als of “trafficking victims” as passive dupes that make easy prey for traffickers.

Work is the reason they came to the United States in the first place and finding new jobs after forced labor allows them to carry out the plans their exploiters interrupted. This Article thus pays  particular attention to ways formerly trafficked persons forge plans to
get ahead economically as they settle into new communities.

The theoretical framework of this Article follows a central premise around which the Coalition of Immokalee Workers (CIW), an agricultural workers’ membership-based advocacy organization in Immokalee, Florida, organizes both its farmworkers’ rights and antislavery campaigns.

I situate trafficking along a continuum of exploitative labor practices that migrants experience in work sites throughout the United States. Through this particular examination of extreme abuses that qualify as “trafficking,” I hope to call attention to how exploitative practices are a regular feature in work sites where undocumented migrants labor.