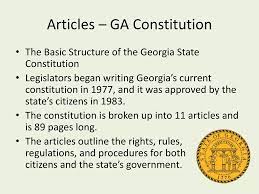 CONSTITUTION ANALYSIS:
OVERVIEW: This assignment will have you explore either the US Constitution or the State of Georgia Constitution and its branches of power and how it addresses your selected issue. This section of the assignment calls for a thorough review and analysis of the federal or Georgia Constitution and how it handles your issue via the legislative, executive, and judicial branches. From this, you should apply the course material related to your issue, the structure of government, its inner workings, programs, and how it contributes to American Government and Politics. More so, you should select the level of government and branch of power that BEST addresses your selected and approved policy issue.

SECTION I: ANALYZE THE FEDERAL OR GEORGIA CONSTITUTION-100 points

Take your approved policy issue and review it through the eyes of the US Constitution or the State of Georgia Constitution.
Determine what section of the selected constitution best addresses your issue.
Address the following questions in your final submission:

Review the Branches of Power

In your research, you, at a minimum, identify the following:

Research Sources: You must use and properly cite at least one (1) reputable sources from at least three (3) of the five each of the following categories:

Georgia’s first attempt at constitutional government was initiated in April 1776 by the Provincial Congress called by the Georgia Trustees in response to a series of mass meetings held throughout the colony. This document provided a framework for the transition from colony to state. Soon after Georgia accepted the Declaration of Independence, its first state constitutional convention was organized. Completed in February 1777 and executed without having been submitted to voters for ratification, this constitution remained in effect for twelve years. It vested most governmental authority in a state legislative body, incorporated the separation of powers doctrine, and included a number of basic rights, such as the free exercise of religion, freedom of the press, and trial by jury.