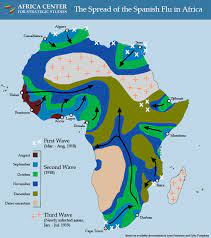 Zimbabwe responded to the Fluenza pandemic

Even though the devastating “Spanish” influenza pandemic of 1918-1919 killed nearly 2 percent of Africa’s population within six months, there has been very limited investigation of this catastrophe, especially in Franco- and Lusophone Africa. This article provides the first continent-wide overview of the disaster, though it concentrates on the worst-hit sub-Saharan region.

It traces the pandemic’s arrival and spread, the unsuccessful attempts to check it, the enormous disruption of everyday life that it caused, the demographic havoc it wrought, and the effects of all of these on Africans at the time and for at least one generation thereafter. In doing this, the following five sections also consider two even larger questions – the pandemic’s relationship to World War I and why it was so severe in sub-Saharan Africa.

Of all six continents, Africa – and particularly sub-Saharan Africa – suffered the highest average mortality rate in the pandemic.[1] On the causative H1N1 influenza virus, its possible evolution and the highly infectious and life-threatening character of the pandemic it drove, see the entry in this online encyclopedia for “The ‘Spanish’ Influenza of 1918-1919”.

That entry refers to the pandemic’s three distinct but related waves, an infectious but relatively mild first wave in March-July 1918, the deadly second wave in August-December 1918, and a serious but more moderate third wave in 1919.

In the case of Africa, only North Africa and, belatedly, a corner of southeast Africa, appear to have experienced the first wave. This means that, unlike the Americas, Europe and Asia (all of which were swept by the first wave), most of sub-Saharan Africa’s initial exposure to the pandemic was to the lethal second wave.

The corollary of this was that the bulk of its population, unlike most other inhabitants of the world, had no opportunity to contract first-wave “Spanish” flu and thereby develop a degree of immunity to its far deadlier successor a few months later.

They were therefore hit by the full, unmitigated force of the pandemic’s second wave – and it showed.

The only Africans to escape this onslaught, at least partially, were those living in the two regions of Africa touched by the first wave, viz. North Africa (the Maghrib and Egypt) and southeastern Africa (especially South Africa’s Natal Province and adjoining territories).

The impact of the lethal second wave in these regions was markedly lighter than elsewhere on the continent, presumably because of their inhabitants’ prior, immunizing exposure to the first wave.

Certainly some contemporaries believed this to be the case and explained the difference as arising from where in Africa the epidemic had commenced. For example, in one district in Southern Rhodesia, locals distinguished between a less severe strain of the disease emanating from Natal and a more severe form coming from Cape Town.

Their gendered worldview led them to label the former the “female” version and the latter the “male”. Alas, for the majority of Africans, it was the “male” form of the “Spanish” flu that they first encountered.

Between mid-August and late September 1918, the virulent second wave entered sub-Saharan Africa through three of its war-swollen seaports, Freetown, Cape Town and Mombasa. In each case, war-related factors played a significant role. To Freetown, the virus came from England aboard a Royal Navy warship on which it had begun to rage during the voyage south.

By the time this vessel docked in Freetown on 14 August 1918, 124 of its crew had been laid low. Nonetheless, it was not placed under strict quarantine, probably because the civilian authorities there were reluctant to disrupt naval operations.

Colliers were therefore permitted on board to load coal, while medical staff from other warships came over to help out in its sickbay. The result was that, within days, the port’s colliers and dock labourers were going down with “Spanish” flu like ninepins, as were sailors aboard the other warships.

From them it quickly spread to Freetown’s general population, 70 percent of whom were stricken within a fortnight. Describing a situation that was to become common throughout Africa in the coming weeks, the governor reported, “The disease spread with devastating rapidity, disorganizing everything. Everybody was attacked almost at once.”

The infection of Cape Town and its interior stemmed directly from Freetown. Two troopships transporting South African Native Labour Corps troops home from Europe had stopped in Freetown to coal at the height of the outbreak. No sooner did they leave the port than cases of “Spanish” flu began to appear on board.

This prompted the health authorities in Cape Town to hospitalize those who were still sick when the ships tied up there in September 1918 and to confine the remaining soldiers to a military camp for two days, under less-than-rigid quarantine. When none showed symptoms of influenza, they were formally demobilized and allowed to embark on trains for their homes all over the country.

The next day, cases of “Spanish” influenza appeared among the staff of the military camp and the transport unit that had conveyed the troops there, among the hospital staff, and among stevedores and fishermen working in the harbour.

Whether the ship from India that is reported to have brought the “Spanish” flu to the third African point of entry, Mombasa, late in September 1918 had a military connection too is unclear. However, what is known is that the disease was soon prevalent among the Kenyan Carrier Corps who fanned out from the port across Kenya on being demobilized.

As they travelled upcountry, so did the gathering epidemic, sweeping through the countryside via rail, road and river. A similar pattern of infection is evident from the Tanganyikan coast inland, and from there into Nyasaland. A King’s African Rifles Regiment marching along this route to be demobilized “strewed the road with dead and dying”, an official on the spot reported grimly.

Thus did the influenza virus spread, to a greater or lesser extent, throughout sub-Saharan Africa in the last quarter of 1918. From these three ports – which had become veritable nodes of infection for the continent – the pandemic spread along the coast and far inland, engulfing community after community.

Prime vectors on land were newly demobilized soldiers and carriers/porters, families fleeing infected towns for their lives, and railway personnel and migrant workers desperate to escape from mine compounds and barracks where death was rampant. In Kimberley, for example, thousands of diamond miners “made up their minds to leave, and if De Beers [the mineowners] did not agree [they insisted] they would break out, even if fired upon”, reported a panicky labour agent, while an official in Northern Rhodesia recalled “the pell-mell flight from many labour centres [there] and the natural reluctance to return to what were regarded as centres of infection”.

Within three months of its arrival by sea, therefore, the H1N1 influenza virus was causing death and mayhem even deep in the interior of west, central, southern and eastern Africa thanks to the ubiquity of flu-infected men on the move. As one historian recognized, it was as if “the colonial transportation network had been planned in preparation for the pandemic”, allowing the latter to ravage the continent far and wide, from Dakar to Mombasa and from the Cape to the Congo.