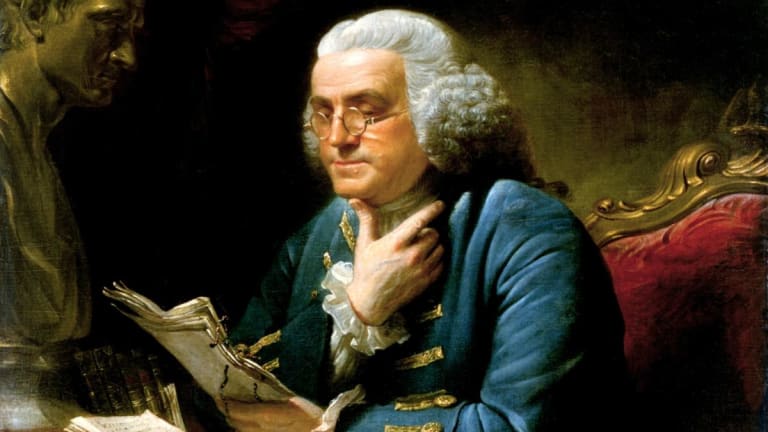 Write about Benjamin Frankin’s discovery/exploration and William Cullen Bryant’s thoughts about nature and tied together by a shared element–this may be in content/subject or literal attributes of the writings.

The paper will feature an analysis of the two selected texts and an in-depth discussion on how the two pieces connect. Finally, the paper will end on the value of these texts and the study they contribute to American identity/society.
The reason why you go through this exercise is to illustrate the complex meaning and insight these writers have given to American culture/intellect (either through their mechanical craft or the topics they chose to address in their writing).

Benjamin Franklin was many things in his lifetime: a printer, a postmaster, an ambassador, an author, a scientist, a Founding Father. Above all, he was an inventor, creating solutions to common problems, innovating new technology, and even making life a little more musical.

Despite creating some of the most successful and popular inventions of the modern world, Franklin never patented a single one, believing that they should be shared freely: “That as we enjoy great Advantages from the Inventions of others, we should be glad of an Opportunity to serve others by any Invention of ours; and this we should do freely and generously.”

Here are some of Benjamin Franklin’s most significant inventions:

Franklin is known for his experiments with electricity – most notably the kite experiment – a fascination that began in earnest after he accidentally shocked himself in 1746. By 1749, he had turned his attention to the possibility of protecting buildings—and the people inside—from lightning strikes. Having noticed that a sharp iron needle conducted electricity away from a charged metal sphere, he theorized that such a design could be useful:

“May not the knowledge of this power of points be of use to mankind, in preserving houses, churches, ships, etc., from the stroke of lightning, by directing us to fix, on the highest parts of those edifices, upright rods of iron made sharp as a needle…Would not these pointed rods probably draw the electrical fire silently out of a cloud before it came nigh enough to strike, and thereby secure us from that most sudden and terrible mischief!”

Like most of us, Franklin found that his eyesight was getting worse as he got older, and he grew both near-sighted and far-sighted. Tired of switching between two pairs of eyeglasses, he invented “double spectacles,” or what we now call bifocals. He had the lenses from his two pairs of glasses – one for reading and one for distance – sliced in half horizontally and then remade into a single pair, with the lens for distance at the top and the one for reading at the bottom.

An avid swimmer, Franklin was just 11 years old when he invented swimming fins—two oval pieces of wood that, when grasped in the hands, provided extra thrust through the water. He also tried out fins for his feet, but they weren’t as effective. He wrote about his childhood invention in an essay titled “On the Art of Swimming”:

“When I was a boy, I made two oval [palettes] each about 10 inches long and six broad, with a hole for the thumb in order to retain it fast in the palm of my hand. They much resembled a painter’s [palettes]. In swimming, I pushed the edges of these forward and I struck the water with their flat surfaces as I drew them back. I remember I swam faster by means of these [palettes], but they fatigued my wrists.”

In 1742, Franklin—perhaps fed up with the cold Pennsylvania winters—invented a better way to heat rooms. The Franklin stove, as it came to be called, was a metal-lined fireplace designed to stand a few inches away from the chimney. A hollow baffle at the rear let heat from the fire mix with the air more quickly, and an inverted siphon helped to extract more heat. His invention also produced less smoke than a traditional fireplace, making it that much more desirable.

Franklin was inspired to invent a better catheter in 1752 when he saw what his kidney (or bladder) stone-stricken brother had to go through. Catheters at the time were simply rigid metal tubes—none too pleasant. So Franklin devised a better solution: a flexible catheter made of hinged segments of tubes. He had a silversmith make his design and he promptly mailed it off to his brother with instructions and best wishes.