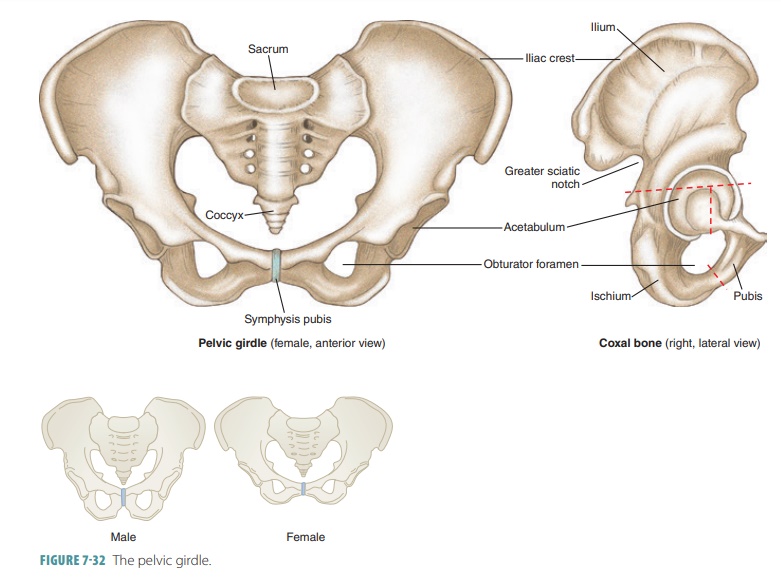 Explain why it is it necessary for the bones of the pelvic girdle to be more massive than the bones of the pectoral girdle.  Be sure to list which bones are included in the pelvic girdle and the pectoral girdle as well.  Also, explain how weightlessness could affect the skeletal system.  For example, astronauts deal with this issue while in space. How might observations of astronauts aid researchers in understanding a condition such as osteoporosis and help develop ways to treat it?

The pelvic girdle (hip girdle) is formed by a single bone, the hip bone or coxal bone (coxal = “hip”), which serves as the attachment point for each lower limb. Each hip bone, in turn, is firmly joined to the axial skeleton via its attachment to the sacrum of the vertebral column. The right and left hip bones also converge anteriorly to attach to each other. The bony pelvis is the entire structure formed by the two hip bones, the sacrum, and, attached inferiorly to the sacrum, the coccyx (Figure 6.48).

Unlike the bones of the pectoral girdle, which are highly mobile to enhance the range of upper limb movements, the bones of the pelvis are strongly united to each other to form a largely immobile, weight-bearing structure. This is important for stability because it enables the weight of the body to be easily transferred laterally from the vertebral column, through the pelvic girdle and hip joints, and into either lower limb whenever the other limb is not bearing weight. Thus, the immobility of the pelvis provides a strong foundation for the upper body as it rests on top of the mobile lower limbs.

Figure 6.48. Pelvis
The pelvic girdle is formed by a single hip bone. The hip bone attaches the lower limb to the axial skeleton through its articulation with the sacrum. The right and left hip bones, plus the sacrum and the coccyx, together form the pelvis.

The hip bone, or coxal bone, forms the pelvic girdle portion of the pelvis. The paired hip bones are the large, curved bones that form the lateral and anterior aspects of the pelvis. Each adult hip bone is formed by three separate bones that fuse together during the late teenage years. These bony components are the ilium, ischium, and pubis (Figure 6.49). These names are retained and used to define the three regions of the adult hip bone.

The ilium is the fan-like, superior region that forms the largest part of the hip bone. It is firmly united to the sacrum at the largely immobile sacroiliac joint (see Figure 6.49). The ischium forms the posteroinferior region of each hip bone. It supports the body when sitting. The pubis forms the anterior portion of the hip bone. The pubis curves medially, where it joins to the pubis of the opposite hip bone at a specialized joint called the pubic symphysis.

The three areas of each hip bone, the ilium, pubis, and ischium, converge centrally to form a deep, cup-shaped cavity called the acetabulum. This is located on the lateral side of the hip bone and is part of the hip joint. The large opening in the anteroinferior hip bone between the ischium and pubis is the obturator foramen. This space is largely filled in by a layer of connective tissue and serves for the attachment of muscles on both its internal and external surfaces.