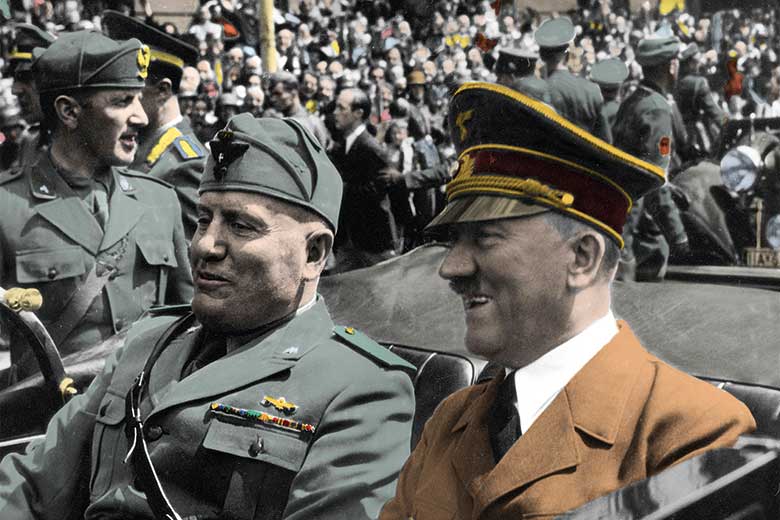 Why did Mussolini form an alliance with Hitler?

Why did Mussolini form an alliance with Hitler?

MUSSOLINI MEETS WITH HITLER IN GERMANY

In 1936, Germany and Italy signed a military alliance. The two powers formed the so-called Berlin-Rome Axis. This footage shows Italian Fascist leader Benito Mussolini’s state visit to Germany in September 1937. He met with Hitler in Munich and the two leaders also toured other parts of Germany. During the state visit, Mussolini attended a military parade in Berlin, Germany’s capital. Although both dictators declared their desire for peace, Germany would begin World War II in 1939. Italy would then enter the war as Germany’s ally against Britain and France.

Germany declares a Roman holiday for Mussolini. The destiny of Europe rides with the dictator of Italy, nearing Munich in triumph for his momentous conference with fellow dictator Hitler. The stage is set for the meeting which means so much to the peace of an entire continent. This is history in the making, the handshake of dictatorships. Striding side by side, the two ex-corporals of the World War seem to be in step today, and the whole world is asking, do they march together for conflict or for peace? Unusual is this mighty demonstration of Teutonic adulation for a modern Caesar.

Since the days of other Caesars, the sons of the Rhine and of the Tiber have been natural foes. But for the moment, Rome and Berlin decide to let bygones be bygones. Returning Mussolini’s hospitality of three years ago, Hitler parades his might for his brother dictator, perhaps to impress Italy, as well as the world, with his potential strength. For history shows that often the friends of today are the foes of tomorrow. Amid all this martial display, the dictators declare themselves for peace, and an apprehensive world hopes for the best.

Mussolini and Hitler had not always been allies. In 1934, for example, Hilter had tried to annex Austria, but had to give up because Mussolini threatened to declare war on Germany, and at that moment the German army was still very weak.

The situation changed after 1936 because the League of Nations had imposed economic sanctions on Italy for the invasion of Ethiopia (rightly by the way, because Italy also used toxic gases) and then Mussolini decided to align with the Nazi regime. Mussolini knew perfectly well the state of unpreparedness of his armed forces and that the Italian economy (they were still the years of the Great Depression) was in terrible condition, so one of the clauses of the “Steel Pact” signed on May 22nd 1939 was that neither Italy nor Germany should have declared a war by the autumn of 1942: Mussolini hopes to be able to bridge the gap with other European countries within that time frame. On September 1, Germany invaded Poland and began WWII.

From Mussolini’s point of view the alliance with Germany was a convenient alliance to force the hand with Great Britain and France to obtain advantages for Italy, but was not interested in war. He partly shared the policy of Appeasement promoted by British Prime Minister Chamberlain, but in reality he aimed above all to exploit the crisis between Germany and the Allies for their own interests. A perfect example is the Munich Agreement of 1938, to resolve the crisis between Germany and Czechoslovakia for the question of the Sudeet: Mussolini proposed himself as a mediator to resolve the crisis and asked for this he tried to obtain some benefits from France for the Italian colonies in Africa.

In Italy the fascist regime (and also civil society) was very divided internally on the alliance with Germany: many members of the fascist government such as Italo Balbo (Governor of Libya and aviation minister), Dino Grandi (head of parliament ), Galeazzo Ciano (Foreign Minister and husband of Mussolini’s daughter) and Emilio de Bono (Marshal of Italy and superintendent of Italian troops lined up in the colonies) were strongly opposed because Hitler had always shown himself to be very aggressive and ready to violate the agreements internationals, so they didn’t trust the Nazis. I named these people because, with the exception of Italo Balbo who died in 1940, they will be the supporters of Mussolini’s fall in the summer of 1943.