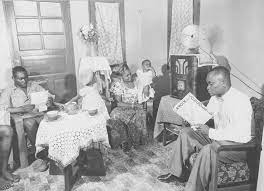 Why did Lumumba fail to realize his vision of united, “centralized” Congolese state? Present an argument addressing both the constraints imposed by the colonialism on the Congo and the internal disagreements among the Congolese politicians/elites.

Why did Lumumba fail

Why did Lumumba fail to realize his vision of united, “centralized” Congolese state? Present an argument addressing both the constraints imposed by the colonialism on the Congo and the internal disagreements among the Congolese politicians/elites. Analyze at least FOUR scenses/examples from the film LUMUMBA as evidence to support your argument

A photograph presents the bourgeois family idyll in Léopoldville. The father, sitting in an armchair in the foreground, dominates the living room scene. He is wearing a white shirt and tie, polished leather shoes and trousers with a crease in them. His elbows resting on the arms of the chair, he is engrossed in the Voix du Congolais, a newspaper for the vernacular elite published by the Belgian Congo’s General Government from 1945 onwards.

In the centre of the picture but in the background, his wife, wearing a dress, is holding a baby in her arms. In front of her to the left there are two children: their daughter is standing with her face turned away from the camera, and their older son is also reading. The living room is equipped with a radio and a fan, while the tables are decorated with flowers and crocheted tablecloths. A tea service sits on the coffee table, around which the family members are arranged.

This photograph, commissioned by the General Government’s Press and Propaganda Department in 1952 and titled “A Family of Congolese Évolués in Léopoldville” reveals what the Belgian colonial state viewed as exemplary and civilized family life within the framework of its elite-making.

This is just one example of the countless photographs and articles relating to the model évolué that circulated after the Second World War in the colonial public sphere. The socalled évolués were a small but elite group of educated Congolese,¹ consisting
of graduates of mission secondary schools and holders of subaltern posts in the colonial working world. They had made their voices heard and articulated their first demands to the colonial state shortly before the end of the war, calling for a special legal status, improved living conditions, a greater say and recognition.

“What will be our place in the world of tomorrow?”² – this is how Paul Lomami-Tshibamba’s article summed up the question of their position in the future colonial order, with as much apprehension as expectation, in March 1945.³

In this study I use the – less than optimal – terms “Congolese” and “Congolese people.” With reference to the elite, I alternate between the terms “vernacular elite” and “Congolese elite.” I speak of Africans and Europeans when, as in the legal debate, this reflects the terminology  in the sources. On the problems entailed in using groups and identities as analytical units, see R. Brubaker and F. Cooper, “Beyond ‘Identity,’” Theory and Society 29, no. 1 (2000).

In very general terms, an order may be understood as the situatedness of people in “organizations, institutions and systems, as well as through institutionalized expectations, traditions, customs and traditions.” See J. Baberowski, ing this period, the colonial state found itself compelled, for the first time, to set about forming a so-called African elite, and it defined this group’s desirable features.

What emerged was a highly idealized set of discourses and images steered by the colonial state, from which the évolués had to take their lead if they were to be viewed as legitimate representatives of the elite.

The colonial public sphere, particularly periodicals such as the Voix du Congolais, portrayed this new elite as much as they staged and guided it.