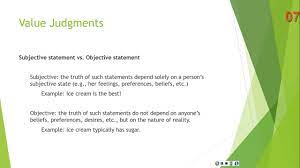 Why a value judgment have no object truth

Using practical illustration in politics, religion, medicine and law explain why a value judgment, unlike a factual statement will have no object truth.

Some moral arguments are intended to be prescriptive. In a moral setting, advice may be offered either by specifying a particular action that ought to be performed, or by providing general moral rules, principles, or guidelines that should be followed. Some moral arguments are normative. Normative arguments establish standards for correct moral behavior; determining norms or rules of conduct.

When studying moral arguments, it is important to be conversant with the following concepts:

All government economic policies are influenced by value judgements, which vary from person to person, resulting in fierce debate between competing political parties.

Positive statements are objective statements that can be tested, amended or rejected by referring to the available evidence. Positive economics deals with objective explanation and the testing and rejection of theories.

Positive statements ought to be value judgement free – but this is often hard to achieve because we all bring to discussion and debate a set of values of ideas.

Deciding whether a statement is positive or normative is a common multiple-choice question.

Examiners may include words such as ‘should’ in statements that are positive (this is done to make students think they are normative and contain valuejudgements!).