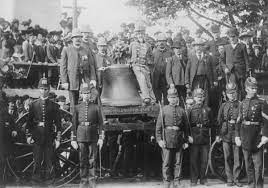 What were the stages of historical development in American policing?

What were the stages of historical development in American policing? How did policing styles differ by historical era?

What is the role of interrogation in intelligence gathering?  List each of the Miranda warnings.  Which recent U.S. Supreme Court cases have affected Miranda warning requirements?

What are the different types of police corruption? What themes run through the finding of the Knapp Commission and the Wickersham Commission? What innovative steps might police departments take to reduce or eliminate corruption among their officers?

Researchers Kelling and Moore (1991) evaluated the first three eras of policing. These eras are discussed below, and are often referred to as the Political Era, the Reform Era, and the Community Era. Through the microscope of seven topical areas, listed below, an understanding of how policing evolved begins.

These seven characteristics have been used to evaluate how policing operated throughout history, most notably through its organizational structure, tactics, and primary focus. [1]

Political Era: The political era is often referred to as the first era of policing in the United States and it began around the 1840s with the creation of the first bona fide police agencies in America [2]

This era of policing is marked by the industrial revolution, the abolishment of slavery, and the formation of large cities. One way to confirm the start of this era is to look at the creation of police departments in larger cities:

With the advent of the industrial revolution, came goods and services. Along with new job opportunities, came a myriad of conflict as well. The fast-growing cities had to answer these problems with solutions in the form of policing.

The abolishment of slavery and the new free black population created many unforeseen issues too with The Klu Klux Klan. The Klan began to make terrifying appearances and their reign of terror left many in fear. Policing had not yet formally entered the scene; therefore, The Klan operated virtually unencumbered.

The United States saw tremendous growth in major cities, had the industrial revolution, and the abolished slavery, which is when the Political Era of policing was set into motion. As its name suggests, it was an era of politics, mainly because of how policing was limited as a result of new laws, made clear by the Constitution. America answered the call by following the English and Sir Robert Peel’s principles.

Not unlike today, policing during this era was under the control of politicians. Politicians, like the mayor, had no problem controlling everything a policeman did during his call of duty (NOTE: the word policeman/men is utilized in this era/context, because during this time period, women were not allowed in the profession, and if they were accepted it was under a microscopic view of certain stereotypical matronly duties to be performed).

In fact, Black policemen were rarely hired. Black policemen made their way into policing in the late 1800s, but when the Civil Rights Act of 1875 was ruled unconstitutional, Black officers all but disappeared from policing until the 1950s.