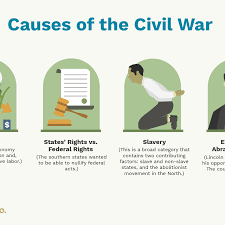 What led to the outbreak of the Civil War? The American Civil War erupted after a prolonged period of conflict between the North and the South.

What led to the outbreak of the Civil War?

Essay B: Answer the following prompt with a 5-7 paragraph (500-750 words) Essay (25 points) The American Civil War erupted after a prolonged period of conflict between the North and the South. What led to the outbreak of the Civil War?

The Outbreak of the Civil War: Causes and Consequences

The American Civil War was a conflict fought between the Confederate States of America, made up of 11 southern states that seceded from the United States, and the Union states, made up of 23 northern states. It lasted for four years and resulted in the death of over 600,000 soldiers. But what led to this bloody war? In this blog post, we will explore the causes and consequences of the Civil War!

The outbreak of the Civil War was caused by a variety of factors. One of the main causes was slavery. The southern states depended on slavery for their economy, while the northern states had abolished it. This led to a divide between the two regions and ultimately led to secession.

Another cause of the war was state rights. The southern states felt that they were not being represented fairly in the federal government and that their rights were being infringed upon. This feeling only intensified when Abraham Lincoln, who was opposed to slavery, was elected president in 1860.

The consequences of the Civil War were far-reaching. It resulted in the death of over 600,000 soldiers, which was more than any other conflict in American history. It also had a devastating impact on the southern economy, as it destroyed much of the infrastructure. The war also led to the ratification of the 13th Amendment, which abolished slavery.

Overall, the Civil War was a tragic and momentous event in American history. It is important to understand its causes and consequences in order to fully appreciate its impact. Thanks for reading! I hope this blog post helped you learn more about the Civil War!

If you’re interested in learning more about American history, be sure to check out our other blog posts! We cover a wide range of topics, from the Revolutionary War to the Cold War. Stay tuned for more great content!

The 1860 election of Abraham Lincoln was a turning point for the United States. Throughout the tumultuous 1850s, the Fire-Eaters of the southern states had been threatening to leave the Union. With Lincoln’s election, they prepared to make good on their threats. Indeed, the Republican president-elect appeared to be their worst nightmare. The Republican Party committed itself to keeping slavery out of the territories as the country expanded westward, a position that shocked southern sensibilities. Meanwhile, southern leaders suspected that Republican abolitionists would employ the violent tactics of John Brown to deprive southerners of their slave property. The threat posed by the Republican victory in the election of 1860 spurred eleven southern states to leave the Union to form the Confederate States of America, a new republic dedicated to maintaining and expanding slavery. The Union, led by President Lincoln, was unwilling to accept the departure of these states and committed itself to restoring the country. Beginning in 1861 and continuing until 1865, the United States engaged in a brutal Civil War that claimed the lives of over 600,000 soldiers. By 1863, the conflict had become not only a war to save the Union, but also a war to end slavery in the United States. Only after four years of fighting did the North prevail. The Union was preserved, and the institution of slavery had been destroyed in the nation.

THE CAUSES OF THE CIVIL WAR

Lincoln’s election sparked the southern secession fever into flame, but it did not cause the Civil War. For decades before Lincoln took office, the sectional divisions in the country had been widening. Both the Northern and southern states engaged in inflammatory rhetoric and agitation, and violent emotions ran strong on both sides. Several factors played into the ultimate split between the North and the South.

One key irritant was the question of slavery’s expansion westward. The debate over whether new states would be slave or free reached back to the controversy over statehood for Missouri beginning in 1819 and Texas in the 1830s and early 1840s. This question arose again after the Mexican-American War (1846–1848), when the government debated whether slavery would be permitted in the territories taken from Mexico. Efforts in Congress to reach a compromise in 1850 fell back on the principle of popular sovereignty—letting the people in the new territories south of the 1820 Missouri Compromise line decide whether to allow slavery. This same principle came to be applied to the Kansas-Nebraska territories in 1854, a move that added fuel to the fire of sectional conflict by destroying the Missouri Compromise boundary and leading to the birth of the Republican Party. In the end, popular sovereignty proved to be no solution at all. This was especially true in “Bleeding Kansas” in the mid-1850s, as pro- and antislavery forces battled each another in an effort to gain the upper hand.