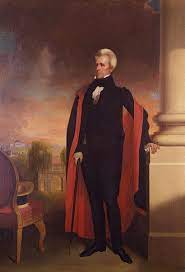 For this assignment, you will need to use President Andrew Jackson State of the Union Address, December 6, 1830.  OR Here. You will also need to find TWO more appropriate sources relating to Cherokee removal.

Use President Andrew Jackson State of the Union Address, December 6, 1830

Please respond to the following essay prompt in a 4-6 pages, double-spaced essay.  Use 12-point font and reasonable margins (not to exceed 1.25”).  This is a scholarly paper and should be written as such.  Do not use slang, nor texting language.  Also, do NOT assume reader knowledge.  Imagine you are writing this for a student interested in the field who has not read the text.

Remember what we discussed in class regarding historical essays, one of the keys is organization.  Make sure you have a clear thesis that you support with supporting examples from the sources.  Make sure you state your position (argument/thesis) clearly at the beginning of your essay.  Watch your grammar and spelling; make sure to edit your work carefully.  If you have any questions, please do not hesitate to contact me.

Please note:  For this assignment, you will need to use President Andrew Jackson State of the Union Address, December 6, 1830.  OR Here. You will also need to find TWO more appropriate sources relating to Cherokee removal.

Prompt: We have been recently discussing the early stages of U.S. Federal Indian policy.  I described that policy as a pendulum oscillating between dual tendencies.  Which of these tendencies to you think Andrew Jackson’s State of the Union address supports?  What was the Cherokee position regarding the proposed removal?

Instructions for this week’s submission:

Make sure you weigh your two chosen sources carefully.  What is the context in which the source emerged?  Who authored or created the source?  What was their perspective?  What was their interest in Cherokee removal?  Were they credible sources?  Did they have a stake in the outcome?

On December 6, 1830, in his annual message to Congress, President Andrew Jackson informed Congress on the progress of the removal of Indian tribes living east of the Mississippi River to land in the west.

The Act authorized the President to negotiate removal treaties with Indian tribes living east of the Mississippi River, primarily in the states of Georgia, Tennessee, Alabama, Mississippi, North Carolina, and others. The goal was to remove all American Indians living in existing states and territories and send them to unsettled land in the west.

In his message on December 6, 1830, President Jackson informed Congress on the progress of the removal, stating, “It gives me pleasure to announce to Congress that the benevolent policy of the Government, steadily pursued for nearly thirty years, in relation to the removal of the Indians beyond the white settlements is approaching to a happy consummation.”

Jackson declared that removal would “incalculably strengthen the southwestern frontier.” Clearing Alabama and Mississippi of their Indian populations, he said, would “enable those states to advance rapidly in population, wealth, and power.”

By the end of Jackson’s Presidency, his administration had negotiated almost 70 removal treaties. These led to the relocation of nearly 50,000 eastern Indians to the Indian Territory—what later became eastern Oklahoma. It opened up 25 million acres of eastern land to white settlement and, since the bulk of the land was in the American south, to the expansion of slavery.

Perhaps the most well-known treaty, the Treaty of New Echota, ratified in 1836, called for the removal of the Cherokees living in Georgia, North Carolina, Tennessee, and Alabama. The treaty was opposed by many members of the Cherokee Nation; and when they refused to leave, Maj. Gen. Winfield Scott was ordered to push them out. He was given 3,000 troops and the authority to raise additional state militia and volunteer troops to force removal.

Despite Scott’s order calling for the removal of Indians in a humane fashion, this did not happen. During the fall and winter of 1838-39, the Cherokees were forcibly moved from their homes to the Indian Territory—some having to walk as many as 1,000 miles over a four-month period. Approximately 4,000 of 16,000 Cherokees died along the way. This sad chapter in our history is known as the “Trail of Tears.”

By the 1840s, nearly all Indian tribes had been driven west, which is exactly what the Indian Removal Act intended to accomplish.