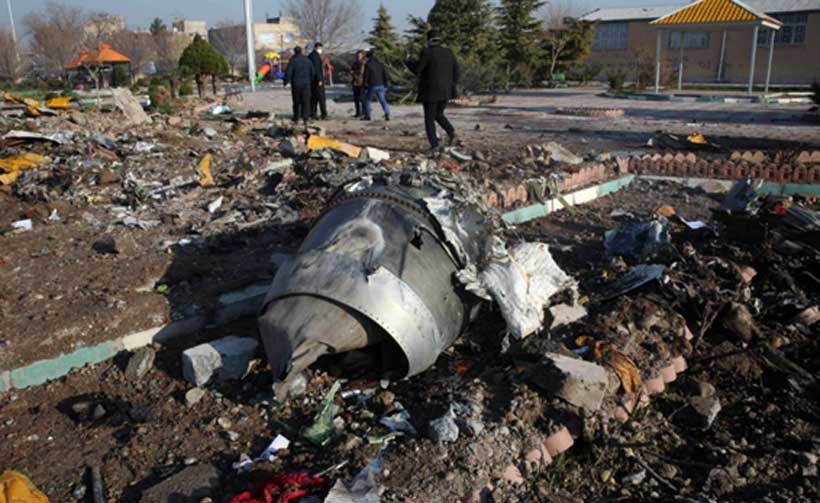 Ukraine International Airlines Flight 752 (PS752) was a scheduled international passenger flight from Tehran to Kyiv. On 8 January 2020, the Boeing 737-800 was hit by two missiles shortly after taking off from Tehran. All 176 people on board died. The shootdown occurred during the 2019-2021 Persian Gulf crisis.

Since the shooting down of Malaysia Airlines flight MH17 from Amsterdam to Kuala Lumpur in 2014, airline operators, governments, and aviation safety agencies have been more vigilant and proactive in operating flights in the vicinity of known conflict zones.

The last moments in the cockpit of Ukraine International Airlines Flight PS752 began with the kind of banal calm that seems typical of commercial pilots the world over.

“Eighty knots,” reported First Officer Serhii Khomenko, 48, as the Boeing 737-800 lifted off from Iran’s Imam Khomeini Airport in the early-morning dark of Jan. 8, 2020.

“Good morning,” Khomenko told air-traffic control soon after. “On board on course.”

Behind the pilots was a cabin filled with 167 passengers, a remarkable number of them heading to Canada via Ukraine: 55 citizens of this country, 30 permanent residents and 53 more returning for studies and other reasons. Many had spent the Christmas holiday period in Iran, visiting relatives, getting married, attending a memorial service.

They made it barely 100 kilometres.

Six minutes after taking off, the plane, flames licking from the fuselage, plummeted toward earth. It ploughed into a park gazebo, then across a soccer field, exploding in a ball of fire that left the jet in pieces and all 176 souls on board dead.

For three days, Iranian officials insisted that some kind of catastrophic technical failure had led to the crash — as evidence at the lightly secured scene was literally bulldozed up and looted by locals.

Then, faced with mounting evidence at odds with their claims, those same officials admitted the shocking truth: An Iranian air-defence team had brought down the passenger jet with two Russian-made missiles.

Unbeknownst to many of the passengers, in fact, the flight had begun in perilous conditions.

As PS752 took off, Iran was bracing for American retaliation just four hours after it had fired missiles at two U.S. military bases, one of them occupied partly by Canadian soldiers. The mobile anti-aircraft battery that destroyed the plane had been moved near the airport barely six hours before. Some relatives and even the captain’s wife, hearing media reports of the military activity, tried to keep their loved ones or the plane itself on the ground. Their efforts were in vain.

The initial cover-up would be just the first questionable action by Tehran in the wake of the tragedy. Exactly two years after the shoot-down occurred, its explanations for what happened that day still ring hollow with foreign governments, the victims’ grieving familes and a United Nations agency. Iran’s callous treatment of the relatives and persecution of those who protested their government’s handling of the affair continue to reverberate.