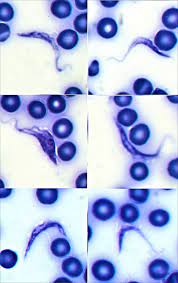 Trypanosoma cruzi. Type of microorganism you have. Gram reaction (if any), shape and arrangement. Virulence factors. How the organism evades the immune system. Diseases your organism can cause.

Type of microorganism you have

Gram reaction (if any), shape and arrangement

How the organism evades the immune system

Diseases your organism can cause.

How your organism can spread to others

How your organism will be treated

What a nurse needs to know about your organism

Prepare an APA format typed essay that documents YOUR understanding of the information and how it pertains to your assigned organism. APA is 12 point font Times New Roman with one-inch margins. Include a title and reference page and 3 to 5 content pages (total 5 to 7 pages).

Include at least 4 APA style references from scholarly articles or resources. For each reference, you will provide an in-text citation by providing a quote or paraphrasing the author’s information.

Chagas disease, also known as American trypanosomiasis, is a potentially life-threatening illness caused by the protozoan parasite Trypanosoma cruzi. About 6­–7 million people worldwide are estimated to be infected with T. cruzi. The disease is found mainly in endemic areas of 21 continental Latin American countries (1), where it has been mostly transmitted to humans and other mammals by contact with faeces or urine of triatomine bugs (vector-borne), known as kissing bugs, among many other popular names, depending on the geographical area.

Chagas disease is named after Carlos Ribeiro Justiniano Chagas, a Brazilian physician and researcher who discovered the disease in 1909.

Chagas disease was once entirely confined to continental rural areas of the Region of the Americas (excluding the Caribbean islands). Due to increased population mobility over previous decades, most infected people now live in urban settings and the infection has been increasingly detected in the United States of America, Canada, and many European and some African, Eastern Mediterranean and Western Pacific countries.

In Latin America, T. cruzi parasites are mainly transmitted by contact with faeces/urine of infected blood-sucking triatomine bugs. These bugs typically live in the wall or roof cracks of homes and peridomiciliary structures, such as chicken coops, pens and warehouses, in rural or suburban areas.

Normally they hide during the day and become active at night when they feed on animal blood, including human blood. They usually bite an exposed area of skin such as the face (hence its common name, kissing bug), and the bug defecates or urinates close to the bite. The parasites enter the body when the person instinctively smears the bug’s faeces or urine into the bite, other skin breaks, the eyes or the mouth.

T. cruzi can also be transmitted by:

Chagas disease presents in two phases. The initial acute phase lasts for about two months after infection. During the acute phase, a high number of parasites circulate in the blood, but in most cases symptoms are absent or mild and unspecific. In less than 50% of people bitten by a triatomine bug, characteristic first visible signs can be a skin lesion or a purplish swelling of the lids of one eye. Additionally, they can present fever, headache, enlarged lymph glands, pallor, muscle pain, difficulty in breathing, swelling, and abdominal or chest pain.

During the chronic phase, the parasites are hidden mainly in the heart and digestive muscle. One to three decades later, up to 30% of patients suffer from cardiac disorders and up to 10% suffer from digestive (typically enlargement of the oesophagus or colon), neurological or mixed alterations. In later years the infection in those patients can cause the destruction of the heart muscle and nervous system, consequent cardiac arrhythmias or progressive heart failure and sudden death.