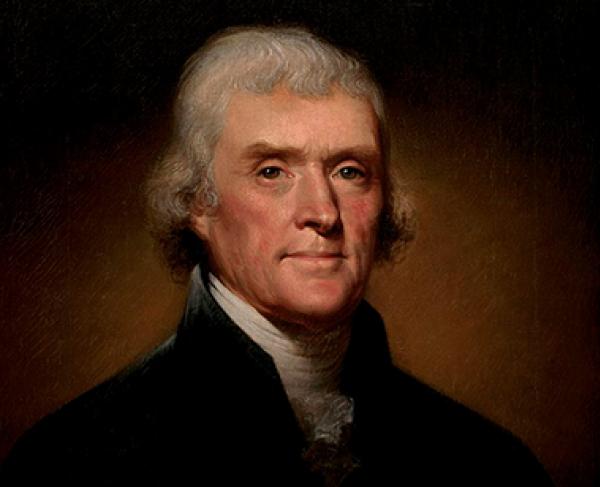 Thomas Jefferson significant contributions to the founding of America

Thomas Jefferson significant contributions to the founding of America

Thomas Jefferson made significant contributions to the founding of America, both as a writer and a politician. However, he didn’t live a perfect life. Was he a hero?

Thomas Jefferson, a spokesman for democracy, was an American Founding Father, the principal author of the Declaration of Independence (1776), and the third President of the United States (1801–1809).

In the thick of party conflict in 1800, Thomas Jefferson wrote in a private letter, “I have sworn upon the altar of God eternal hostility against every form of tyranny over the mind of man.”

This powerful advocate of liberty was born in 1743 in Albemarle County, Virginia, inheriting from his father, a planter and surveyor, some 5,000 acres of land, and from his mother, a Randolph, high social standing. He studied at the College of William and Mary, then read law. In 1772 he married Martha Wayles Skelton, a widow, and took her to live in his partly constructed mountaintop home, Monticello.

Freckled and sandy-haired, rather tall and awkward, Jefferson was eloquent as a correspondent, but he was no public speaker. In the Virginia House of Burgesses and the Continental Congress, he contributed his pen rather than his voice to the patriot cause. As the “silent member” of the Congress, Jefferson, at 33, drafted the Declaration of Independence. In years following he labored to make its words a reality in Virginia. Most notably, he wrote a bill establishing religious freedom, enacted in 1786.

Jefferson succeeded Benjamin Franklin as minister to France in 1785. His sympathy for the French Revolution led him into conflict with Alexander Hamilton when Jefferson was Secretary of State in President Washington’s Cabinet. He resigned in 1793.

Sharp political conflict developed, and two separate parties, the Federalists and the Democratic-Republicans, began to form. Jefferson gradually assumed leadership of the Republicans, who sympathized with the revolutionary cause in France. Attacking Federalist policies, he opposed a strong centralized Government and championed the rights of states.

As a reluctant candidate for President in 1796, Jefferson came within three votes of election. Through a flaw in the Constitution, he became Vice President, although an opponent of President Adams. In 1800 the defect caused a more serious problem. Republican electors, attempting to name both a President and a Vice President from their own party, cast a tie vote between Jefferson and Aaron Burr. The House of Representatives settled the tie. Hamilton, disliking both Jefferson and Burr, nevertheless urged Jefferson’s election.

When Jefferson assumed the Presidency, the crisis in France had passed. He slashed Army and Navy expenditures, cut the budget, eliminated the tax on whiskey so unpopular in the West, yet reduced the national debt by a third. He also sent a naval squadron to fight the Barbary pirates, who were harassing American commerce in the Mediterranean. Further, although the Constitution made no provision for the acquisition of new land, Jefferson suppressed his qualms over constitutionality when he had the opportunity to acquire the Louisiana Territory from Napoleon in 1803.

During Jefferson’s second term, he was increasingly preoccupied with keeping the Nation from involvement in the Napoleonic wars, though both England and France interfered with the neutral rights of American merchantmen. Jefferson’s attempted solution, an embargo upon American shipping, worked badly and was unpopular.