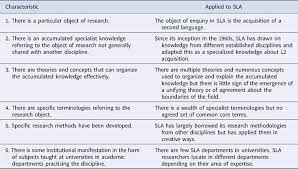 Discuss the main theories of Second Language Acquisition and their implications for foreign language learning. Back your discussion with references to current trends in policy and practice.

Discuss the main theories of Second Language Acquisition and their implications for foreign language learning. Back your discussion with references to current trends in policy and practice.

Second Language Theories and Their influences on EFL in China

This article begins by accounting the development of Second language theories .It describes major ESL theories ever
since the 18th century to those currently adopted in ESL field. Then it proceeds to demonstrate their influences on EFL
teaching in China, like nowadays an increasing awareness of non-cognitive factors in teaching foreign languages,
reforms in some traditional teaching methodologies to satisfy the current demand for temporary EFL learners and
ever-increasing case studies in new teaching modes. Lastly the author points out some problems existed in current EFL
teaching and learning in the hope of drawing the attention of teachers and researches in this field.

1. Introduction
Second language theories have come a long way since the bad old days of rote learning. Here the author generally
reviews the history of major ESL theories ever since 18th century to currently practiced in ESL field.

1.1Grammar -Translation Method
The grammar translation method is a foreign language teaching methodology derived from classical (sometimes called
traditional) methods in teaching Greek and Latin. The method requires that students translate whole texts word for
word and memorize numerous grammatical rules and exceptions as well as enormous vocabulary lists. The goal of this
method is to enable students to read and translate literary masterpieces and classics.

Classes were conducted in the native language. A chapter in a distinctive textbook of this method would begin with a
massive bilingual vocabulary list. Grammar points would come directly from the texts and be presented contextually in
the textbook, explained elaborately by instructors.

Tedious translation and grammar drills would be used to exercise and strengthen the knowledge without much attention
to contents. Sentences would be deconstructed and translated. Eventually, entire texts would be translated from the
target language into native languages and tests would often ask students to replicate classical texts in the target language.

Very little attention was placed on pronunciation or any communicative aspects of the language. The skills exercised
were reading and translation, but only in contexts.

Direct Method
The Direct Method, sometimes also called Natural Method, is a method for teaching foreign languages which refrains
from using learners’ native languages and just uses target languages. This method was established in Germany and
France around 1900.

Characteristic features of the direct method are teaching vocabulary through pantomiming, realia
and other visuals, teaching grammar through an inductive approach (i.e. having learners find out rules through the
presentation of adequate linguistic forms in the target language).

Centrality of spoken language (including a native-like
pronunciation), focus on question-answer patterns and teacher-centeredness also characterize this method.
The Direct Method was an answer to the dissatisfaction with Grammar Translation Method, which teaches students in
grammar and vocabulary through direct translations and focuses on the written language.

There were attempts to set up similar conditions as would imitate the mother tongue acquisition. For this reason these attempts were marked the Natural Method. At the turn of the 18th and 19th centuries, Sauveur and Franke proposed that teaching language should be undertaken within the target-language system.