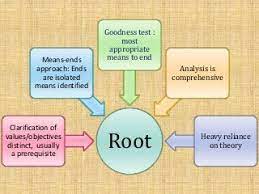 The Science of Muddling Through. Public administration Review, 19, 79-88. How to Write a summary (analysis) of Article. Identify the evidence used to support the thesis Summarize the method, evidence, and results/conclusion

The Science of Muddling Through

How to Write a summary (analysis) of Article.

Page 1 Describe the subject, scope, and purpose of the Article Summarize the author’s thesis or hypothesis.

Identify the evidence used to support the thesis Summarize the method, evidence, and results/conclusion

Page #2 Critique the argument. Is it logical and balanced?

Is the evidence adequate, factual, or merely opinionated?

Is it based on reliable sources / is there substantive information?

Suggest how the Article relates to the real world or this course.

Charles Lindblom’s seminal article, “The Science of ‘Muddling Through,'” recognized serious policy-development limitations at the time of its writing.

He argued that while root analysis theoretically offered a more rational-comprehensive approach policy analysts lacked the intellectual and computing capacity to accomplish it; whereas, branch analysis, or limited successive comparison, was more reachable. Much has changed since then.

This article revisits Lindblom’s arguments and asserts root and branch analyses are separate and distinct from rational-comprehensive and incremental policy approaches.

More rigorous and robust analyses are possible and desirable within the context of an emergent complex adaptive political system framework. Such an approach provides more “analytical” justification and less “muddling through,” yet may still require incremental implementation because of the emergent nature of the system.

This paper concludes with two questions: despite useful tools to support effective policy, do policymakers use rhetoric about advancing a good society merely as a means to achieving political power? If so, can this paradigm be influenced?

Answers are critical for any society constituted as a self-determining regime.

The American Recovery and Reinvestment Tax Act of 2009 and A New Era of Responsibility (Office of Management and Budget, 2009) are recent examples of “muddling through” policymaking in the United States (U.S.) on the grandest scale in history.

Yet, there is no indication these policies benefitted from any analysis of the economic crisis or a risk analysis that treated possible unintended consequences (Jervis, 1997; Merton, 1 936).

Arguably the effort more closely reflects the features of a “garbage can model” advanced by Cohen et al. (1972) and expanded by Kingdon (1995: 84-89); worse, minority party elected policy stakeholders were deliberately disenfranchised from the process.

Fifty years ago, Lindblom (1959) explained and justified the merits of muddling through as a method for policymaking. It represents successive limited comparisons (SLC) of incremental policy improvements.

At the time, he asserted the lack of intellectual capacity and computing power could not support a rational-comprehensive (RC), or root, approach.

Despite intensive computing requirements for mission control in the early 1960s, the National Aeronautics and Space Administration had no computers in any of its facilities, providing strong support for Lindblom’s assertion (Krantz, 2000). Lindblom uses the terms SLC, incrementalism, and branch analysis synonymously. Similarly, he equates RC…

Charles Edward Lindblom (March 21, 1917 – January 30, 2018) was an American academic who studied Economics at the University of Chicago and was Sterling Professor Emeritus of Political Science and Economics at Yale University. He served as President of the American Political Science Association and the Association for Comparative Economic Studies, as well as Director of Yale’s Institution for Social and Policy Studies.

Lindblom was one of the early developers and advocates of the theory of incrementalism in policy and decision-making.[3][4][5] This view (also called gradualism) takes a “baby-steps”, “Muddling Through” or “Echternach Theory” approach to decision-making processes. In it, policy change is, under most circumstances, evolutionary rather than revolutionary. He came to this view through his extensive studies of Welfare policies and Trade Unions throughout the industrialized world. These views are set out in two articles, separated by 20 years: “The Science Of ‘Muddling Through'” (1959) and “Still Muddling, Not yet through” (1979), both published in Public Administration Review.