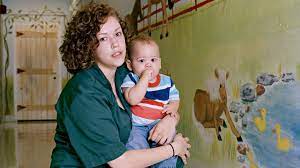 The Pros and Cons of Prison Nurseries. It will consist of a title page as well as a properly formatted bibliography.  The body of this paper will be required to be 5 – 7 pages in length and formatted in an APA style.  I

The Pros and Cons of Prison Nurseries

.  It will consist of a title page as well as a properly formatted bibliography.  The body of this paper will be required to be 5 – 7 pages in length and formatted in an APA style.  In addition, this paper will require no less than 5 sources used to support the information provided within this document.  These sources should result from peer reviewed journals or other scholarly works.

Over the past forty years or so, the United States has seen a steady increase in incarcerated individuals, with 2.2 million people currently in prisons and jails nationwide, according to an organization called The Sentencing Project, which provides updated statistics on prisons and the criminal justice system (2).

While there is a plethora of healthcare issues that women face when locked up, one of the most concerning is that of reproductive health, specifically pregnancy and birth in prison. Roughly one in twenty-five women entering prison or jail is pregnant (Yager). As a result, the number of babies born behind bars has also grown at an alarming rate. It is estimated that up to 2,000 infants are born to incarcerated mothers each year, only to be taken from them a scant twenty-four hours after birth and placed either with a family member, or more often, in the foster care system (Sufrin).

Current scholarly sources have proven prison nursery programs—which allow mothers to keep their infants with them while they serve out their sentences—to be a very effective method in dealing with the issue of incarcerated mothers. Nevertheless, despite this fact, there are only nine nursery programs currently operational in America.

In order to make prison nursery programs more prevalent, we need to better educate correctional administrators on the effectiveness of nursery programs so that mothers, babies, and the nation as a whole can benefit.

I propose addressing administrators through an informative presentation at the American Correctional Association’s annual conventions as well as sending correctional administrators without prison nurseries to successful facilities across the nation to experience firsthand the effectiveness of such programs.

If we take the time to study this issue and better educate individuals on the effectiveness of prison nursery programs, we can begin to improve the prison healthcare system, which is currently failing many women and children alike.

When it comes to women’s healthcare in the prison system, there are many areas that are lacking in adequacy, but several of great importance include the prenatal care and unsafe birthing practices of incarcerated mothers.

According to the journal article “Timing of Conception for Pregnant Women Returning to Jail,” “[a]pproximately 6% to 10% of women entering jails are pregnant” (Clarke et al. 133). This is a significant increase over the past four decades, mostly due to the fact that the number of incarcerated women has increased dramatically. In an article entitled “Perinatal Needs of Pregnant, Incarcerated Women,” Barbara A. Hotelling discusses the lack of quality healthcare provided to expectant mothers behind bars.

Despite adequate healthcare being mandated to all inmates through the Eighth Amendment to the Constitution, women still make up a lesser percentage of total incarcerated individuals than men, which is used by correctional staff to justify providing scarcer healthcare and rehabilitative programs for incarcerated women (Hotelling).

Not to mention the fact that prisons aren’t subject to any sort of external review, which doesn’t encourage the improvement of healthcare services, especially if they are seen as costly endeavors (Hotelling).

As a result, many incarcerated women face unnecessarily high-risk pregnancies. Another practice that increases the risk of complications in pregnancy in prison is the custom of shackling female inmates during labor, delivery, and postpartum. This practice is both degrading and inhumane and can pose a problem for healthcare providers in case of an emergency.

In an official position statement made by the Association of Women’s Health, Obstetric & Neonatal Nurses condemning the use of shackles on pregnant women, the board of directors’ note that the unnecessary practice can interfere with the ability of nurses and health care providers to deliver the proper care and treatment (AWHONN).

Only eighteen states in the U.S. currently ban the shackling of expectant mothers in prison while they give birth (ACLU). The remaining thirty-two states are left to their own devices, in some cases shackling mothers with no regards to the recommendations of nurses and other health care providers.

This poor treatment of female inmates and lack of proper health and prenatal care is cause for concern. When looking at the nine states that currently operate prison nursery programs—California, Illinois, Indiana, Nebraska, New York, Ohio, South Dakota, Washington, and West Virginia—all but three have laws in place that prevent the shackling of inmates while giving birth (Sufrin).

Prisons with nursery programs seem to better understand the necessity of protecting incarcerated mothers and babies throughout the pregnancy and delivery than other prisons. I believe that we should consider the positive effects that implementing prison nursery programs has on the correctional facilities themselves, as providing better healthcare seems to be one key component.