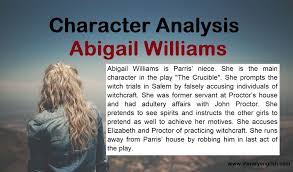 The Crucibles Act 1-2. Explaining Abigail Williams establish your opinion of this character and analyze the character role or purpose in the play.

Explaining Abigail Williams establish your opinion of this character and analyze the character role or purpose in the play.

The Crucible, Arthur Miller’s 1953 realist play, is based on the historical events of the 1692 Salem witch hunts. Although partially fictionalised, it depicts the very real consequences of false accusations based on blind religious faith, as Miller displays the dangers of such baseless rumours. However, the play was written during another type of witch hunt: McCarthyism in 1950s America.

This was a political movement in which Senator Joseph McCarthy attempted to control the spread of Communism by placing any Communist sympathisers on a blacklist.

This resulted in a widespread fear of Communist influences, and a political hunt similar to the Salem witch trials began, as civilians attempted to escape their own charges by accusing other innocent individuals of treason. Thus, given the historical context of the time, Miller uses The Crucible as an allegorical warning for the audience against the dangers of McCarthyism in 1950s America.

These concepts will be fully unpacked later, but it is important to keep these key notions of hysteria, accusation and blind faith in mind as you study the text. These are the fundamental ideas that the play is based upon, and also the elements which make The Crucible hugely relevant in our society today.

One could even say that the development of technology has made it easier for false allegations and social rumours to spread – leading to drastic consequences specific to the 21st century, such as the leaking of critical government information and cyberbullying.

Not to mention, the anonymity of technology has enabled individuals to start modern-day witch hunts as a nameless, faceless user behind the comfort and security of their screens!

In varying degrees, every work of literature reflects its historical context, or the social and political conditions that shaped its time period. The Crucible is a four-act play, which presents a dramatised and partially fictionalised depiction of the 1692 Salem witch trials. It was also published in 1953, at the height of the Second Red Scare, or the heightened fear of Communist influences in America. As such, the play is not merely a play based on historically accurate events, but also an allegory of the disastrous consequences of McCarthyism.

Proctor is a strong and hardworking farmer, respected by those in Salem for his power and independence. Possessing a “sharp and biting way with hypocrites”, Proctor is the symbol of autonomous leadership in the play, acting as another source of social authority to the theocratic leaders of the Puritan Church.

He is the protagonist of the play, but a flawed individual – while he has great strength of character, he is also presented in The Crucible as an adulterous husband, who is openly defiant of his church. As such, he is described by Miller as a kind of “sinner” – one who experiences an internal moral conflict within himself.

Proctor undergoes much personal growth during the plot of the play, redeeming his name and obtaining “goodness” by choosing moral honesty over freedom. This ultimate act of courage symbolises the importance of integrity and honour, and represents the “shred of goodness” in his character.

Although described by Abigail as a “bitter woman”, Elizabeth is the quiet yet resilient wife of Proctor. Her husband’s affair with Abigail renders her resentful towards the former and jealous of the latter, resulting in a wounded and fragile marriage.

Her humility is made evident as she blames herself for Proctor’s infidelity, believing she erred in keeping a “cold house”. In tandem with this icy imagery, Miller utilises Elizabeth as a symbol of honesty and strict moral justice, despite it often being mistaken as “coldness” by others – Proctor asserts that Elizabeth’s justice “would freeze beer”.

Despite this, Elizabeth proves herself to be a caring source of support for her persecuted husband, believing him to be “a good man”, and ultimately breaking her characteristic honesty in the hopes of his freedom. Her extreme courage is ultimately made evident by her willingness to lose Proctor to the hangman’s noose, rather than for him to lose his moral virtue by signing his name to lies.

Described as “a wild thing”, Abigail is a beautiful, yet manipulative and deceptive adolescent with “an endless capacity for dissembling”. Still in love with Proctor after their brief affair, she lies to the court and condemns Elizabeth as a witch, in a desperate, jealous attempt to win him back and take Elizabeth’s place as his wife. Abigail is the ringleader of the girls, and the progenitor of the false rumours that spiral into the witch hunt.

Thus, she embodies falsehood, in a stark contrast to Elizabeth, who is a symbol of truth. Her violent nature is made evident in the play, as she threatens the girls with physical violence and “smashes Betty across the face” in an effort to silence her. Despite this, Miller makes clear that Abigail is a victim of psychological trauma, as she is revealed to have borne witness to the violent death of her parents – partly explaining her disturbed and devious nature.