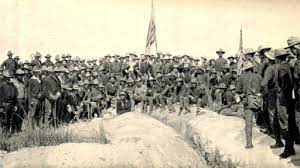 The Conquest of the United States by Spain. Below are excerpts from sociologist William Graham Sumner’s famous lecture to the Phi Beta Kappa society at Yale in 1898.

The Conquest of the United States by Spain

Click the links to below to read and view the sources. Then respond to the discussion question. Your response must be at least 300 words and include specific examples, including quotations and paraphrases from both sources to support your answers.
Remember to include a question for your classmates to respond to in their comments.

Source 1
The Conquest of the United States by Spain. Below are excerpts from sociologist William Graham Sumner’s famous lecture to the Phi Beta Kappa society at Yale in 1898.

Titled The Conquest of the United States by Spain, it offers an unflinching take on the United States’ intended efforts to spread our way of life abroad in the wake of the SpanishAmerican War and describes what Sumner believes will be the result of such efforts.

Spain was the first, for a long time the greatest, of the modern imperialistic states. The United States, by its historical origin, its traditions, and its principles, is the chief representative of the revolt and reaction against that kind of a state.

We have beaten Spain in a military conflict, but we are submitting to be conquered by her on the field of ideas and policies. Expansionism and imperialism are nothing but the old philosophies of national prosperity which have brought Spain to where she now is. Those philosophies appeal to national vanity and national cupidity.

They are seductive, especially upon the first view and the most superficial judgment, and therefore it cannot be denied that they are very strong for popular effect. They are delusions, and they will lead us to ruin unless we are hardheaded enough to resist them.

The question of imperialism, then, is the question whether we are going to give the lie to the origin of our own national existence by establishing a colonial system of the old Spanish type, even if we have to sacrifice our existing civil and political system to do it.

I submit that it is a strange incongruity to utter grand platitudes about the blessings of liberty, etc., which we are going to impart to these people, and to begin by refusing to extend the Constitution over them, and still more, by throwing the Constitution into the gutter here at home. If you take away the Constitution, what is American liberty and all the rest?

Nothing but a lot of phrases.
The point which I have tried to make in this lecture is that expansion and imperialism are at war with the best traditions, principles, and interests of the American people, and that they will plunge us into a network of difficult problems and political perils, which we might have avoided, while they offer us no corresponding advantage in return.

We know that these beliefs, hopes, and intentions have been only partially fulfilled. We know that, as time has gone on and we have grown numerous and rich, some of these things have proved impossible ideals, incompatible with a large and flourishing society, but it is by virtue of this conception of a commonwealth that the United States has stood for something unique and grand in the history of mankind and that its people have been happy.

My patriotism
is of the kind which is outraged by the notion that the United States never was a great nation until in a petty three months’ campaign it knocked to pieces a poor, decrepit, bankrupt old state like Spain.

To hold such an opinion as that is to abandon all American standards, to put shame and scorn on all that our ancestors tried to build up here, and to go over to the standards of which Spain is a representative.

Source 2: Populists and Progressives
Click the link above to view a clip from a documentary. The link will take you first to a log-in page where you will enter your student ID# and password. Then the video clip should begin playing automatically.

Discussion Question
How were U.S. imperialism and progressivism linked with each other in the late nineteenth and early twentieth centuries?