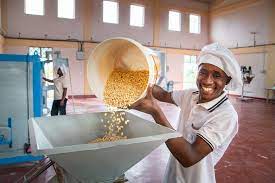 Topic: International Integration. 1)Take an example of East African integration which interests you, and explain it. 2)Can you explain French influence in West African subregional integration?

Take an example of East African integration which interests you

1)Take an example of East African integration which interests you, and explain it.
2)Can you explain French influence in West African subregional integration?

The formation of the East African Community (EAC) in 1999 by the United Republic of Tanzania, the Republic of Kenya and the Republic of Uganda was the achievement of the trio’s cooperation since the collapse of the original EAC in 1977.

The enthusiasm of the EAC to facilitate trade among its members is enshrined in Article 5 (2) of the Treaty establishing the East African Community which states that the first stage of EAC integration will be the formation of a Customs Union, skipping the earlier stages of Preferential Trade Area and Free Trade Area. The EAC Customs Union Protocol came into force in January 2005. The Customs Union has four major elements:

(1) the establishment of a Common External Tariff (CET);

(4) the elimination of Non Tariff Barriers (NTBs). The primary objective of the Protocol establishing the Customs Union is to facilitate inter and intra regional trade in goods.

The Treaty establishing the East African Community then names as subsequent stages of EAC integration the establishment of a Common Market, then a Monetary Union and ultimately a Political Federation.

Achievements of the East African Community

The strides taken by the EAC to have a Customs Union Protocol in force and a Community Law – the Customs Management Act — made it attractive to other countries such Rwanda and Burundi to accede the Treaty in 2006.

The latter two countries became fully fledged members of the EAC in July 2007, and started to implement the Customs Union in 2009. The Republic of Southern Sudan has applied to join the EAC and the process of evaluating her admission is ongoing.

Currently the EAC is recognized globally and representatives from various countries and international organisations have submitted their credentials to the Secretary General of the East African Community.

There are other countries envying to join the regional bloc, as the Summit of EAC Heads of State and Government have said in their 2011 Communiqué. The region has increased both inter- and intra-regional trade, and has also witnessed an increase in intra-EAC Foreign Direct Investments (FDI) as well as in FDI from outside.

The East African Legislative Assembly (EALA) has passed several community laws and the Council of Ministers has established various Sectoral Councils to oversee policy issues in the regional integration progress.

There -is mutual recognition of standards marks across the region where the bureaus of standards have developed an EAC catalogue of Standards. In pursuit of facilitating trade the EAC has embarked on a mission to establish One Stop Border Posts that have already been articulated within the auspices of the Community Law.

Finally, the EAC Council of Ministers has recently approved the ‘EAC Customs Valuation Manual’ – a document which provides guidelines on how to implement and uniformely interpret EAC Customs valuation provisions within the Community and therefore helps overcome challenges in this respect

Despite these progress made throughout the years, some challenges remain noteworthy when it comes to the implementation of the EAC Customs Union.

Implementing the CET has been challenging to the Partner States. Customs valuation procedures have been varying, resulting in different computed values for taxation. Since 2005, Uganda has produced a list of industrial products that are exempted from the CET. A similar list of industrial inputs is in place for Rwanda and Burundi.

Moreover, the United Republic of Tanzania, as a member of both the Southern African Development Community (SADC) and the EAC, has taken integration commitments in both regional contexts, thereby having to implement two CET, one being for EAC and the other for SADC. Likewise, the remaining four –members of the EAC are also members of the Common Market for Eastern and Southern Africa (COMESA), thus facing similar challenges as the one encountered by Tanzania in terms of multiple commitments taken in the contexts of various integration agenda.

Rules of origin implementation has been largely successful in the region, except for a number of challenges where disputes have arisen and verification missions were constituted to address the problems. In the wheat industry, we have for instance observed protectionist tendencies which have been justified using rules of origin-related arguments.

Moreover, efforts in sensitisation/awareness-raising seem to have been too limited to allow relevant stakeholders realize the opportunities they could draw from EAC integration.

Internal Tariff Elimination is an area where the EAC Partner States have scored one hundred percent in implementation, and it is our anticipation that this achievement will be a yardstick to influence the others.

The EAC has undergone great efforts to eliminate Non-Tariff Barriers. Similar efforts have been undertaken at the SADC and COMESA levels, where national and regional structures to monitor and curb NTBs are in place; and have attracted a genuine cooperation between the public and private sectors.

There are however a number of NTBs remaining in the EAC as well as in COMESA and SADC: while some have been eliminated, others are mushrooming up.

The EAC is yet to have a Single Customs Territory despite having the protocol in place. Other notable challenges include challenges emanating from Special Economic Zones (SEZs) and Export Processing Zones (EPZs) regimes as well as those of Investments Promotion Authorities; the delayed adoption of the EAC Industrialisation Policy and Strategy, and the long overdue EAC Sanitary Phytosanitary (SPS) Protocol.

Other developments and challenges: looking beyond the Customs Union

The EAC seems to be the most vibrant Regional Economic Community (REC) in the Southern hemisphere and is tremendously advancing in its integration process: however, crucial issues remains to be addressed.

Despite the challenges encountered in implementing the first stage of integration, i.e the EAC Customs Union, the EAC moved on and entered into a Common Market in 2010, after completing the negotiations in 2009.

The Common Market Protocol calls for liberalisation of the labour market, capital market and services market, as the goods market has already been liberalised by the Customs Union Protocol.

As I am writing this article, implementation of the Common Market in EAC has however not gone beyond the signing and ratification of the Protocol.

There are several national laws that have to be amended so that they are compatible with the Common Market; no single law has been amended by any Partner State so far.

The negotiators have maintained their guts on the negotiating timeframe, and have ignored the economic turbulence facing the Euro Zone’s austerity measures and the macroeconomic convergence. As much as EAC can venture in numerous fronts, this one seems to be rather premature.

The EPA Negotiations are taking twists and turns and at some stage we get convinced that the EAC is not sure what it wants in EPA and how it can achieve it.

Another development to pay attention to is the potential EAC – SADC – COMESA Tripartite Grand Free Trade Area. Given the situation on the ground in terms of EAC integration and the way the REC is engaging on numerous fronts, it is very likely that we can get to the level of signing the Tripartite Grand Free Trade Agreement and still have basic outstanding issues that need to be solved.

Our main appeal to the Secretariats of COMESA, EAC and SADC as well as to individual Partner States is to conduct a self evaluation exercise. It is important that we implement the Abuja Declaration and progress in the regional integration agenda.

But there is a great need of connecting the regional and national players so that the regional commitments get implemented nationally. The poor state of infrastructure and energy also remain a challenge to a great number of African countries, making intra-African trade very expensive.

Opportunities and challenges for Tanzania in the EAC

Tanzania is the largest country in the EAC, it borders all the EAC Partner States and has vast areas of arable land that can be used as a food basket to the other EAC countries as well as beyond EAC

. It has a large coastal strip that is endowed with natural harbours. The country is rich in natural resources including wildlife and has many tourism attraction sites. It has recorded political stability since its independence in 1961.

Likewise, it is worth noting that the headquarters of the EAC are located in Arusha, Tanzania. These are so many attributes that can be considered clear advantages for Tanzania to play a critical role in the EAC and beyond, if a strategic roadmap was to be crafted in Tanzania.