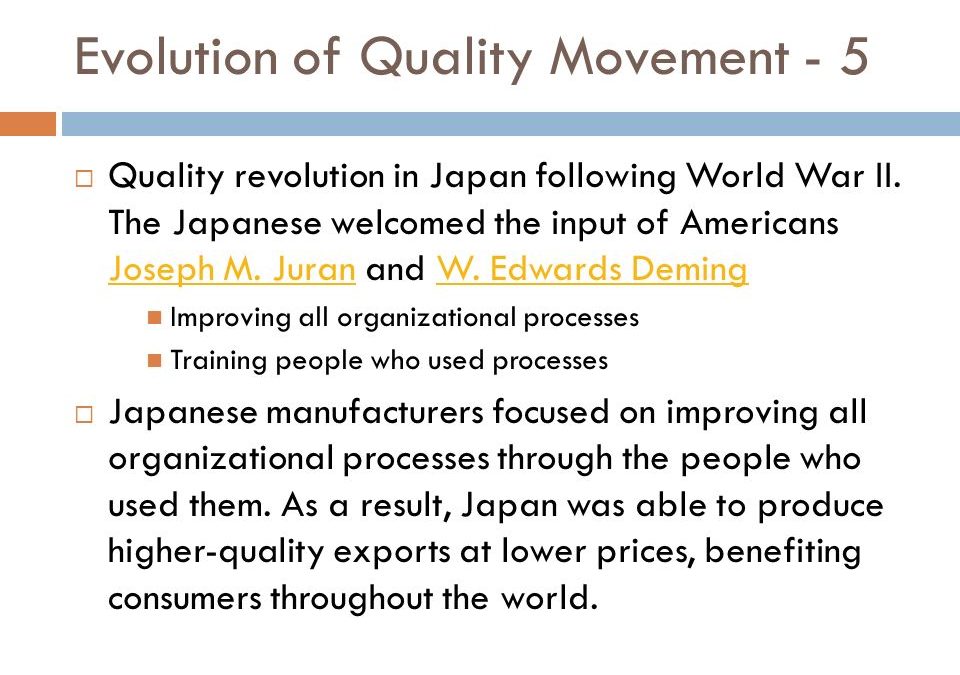 Shewhart source for the data for his statistical process control

Shewhart source for the data for his statistical process control

The Start of the Japanese Quality Movement

When the U.S. forces occupied Japan at the end of World War II to set up the occupation government, they found the Japanese telephone system to be poor in quality and unreliable. General MacArthur’s people knew this would be a major problem for them and for Japan in trying to get the country on its feet again. Bell Laboratories’ people were brought in to assist the Japanese telecommunications industry, and starting in May 1946 they taught their Japanese counterparts the principles of modern quality control based on Dr.  Shewhart’s work.

While the Bell Labs people were in Japan, a copy of Shewhart’s book The Economic Control of Quality of Manufactured Product was given to the Union of Japanese Scientists and Engineers (JUSE). One of its members (the organization had only 12 at the time) was so taken with Shewhart’s ideas that he stenciled by hand a copy of the book onto mimeograph masters so that it could be reproduced and circulated.

The history of quality control is undoubtedly as old as the industry itself. During the Middle Ages, quality was to a large extent controlled by the long period of training required by the society.  This training instilled pride in workers for the quality of a product.

The concept of specialization of labour was introduced during the Industrial Revolution. As a result, a worker no longer made the entire product, only a portion. This change brought about a decline in workmanship. Because most products manufactured during that early period were not complicated, quality was not greatly affected. In fact, because productivity improved there was a decrease in cost, which resulted in lower customer expectations. As products became more complicated and jobs more specialized. It became necessary to inspect products after manufacture.

W.A. Shewhart of Bell Telephone Laboratories developed a statistical chart for the control of product variables. This chart is considered to be the beginning of Statistical Quality Control (SQC). Later in the same decade, H.F. Dodge and H.G. Roming, both of Bell Telephone Laboratories, developed the area of Acceptance Sampling as a substitute for 100% inspection. Recognition of the value of statistical quality control became apparent by 1942. Unfortunately, U.S. managers failed to recognize its value.

W.Edwards Deming, who learned statistical quality control from Shewhart, gave a series of lectures on statistical methods to Japanese engineers and on the quality responsibility to the CEOs of the largest organizations in Japan. Joseph M. Juran made his first trip to Japan in 1954 and further emphasized management’s responsibility to achieve quality. Using these concepts the Japanese set the quality standards for the rest of the world to follow.

U.S. managers were making frequent trips to Japan to learn about the Japanese miracle. These trips were really not necessary—they could have read the writings of Deming and Juran. Nevertheless, a quality renaissance began to occur in U.S. products and services, and by the middle of 1980, the concepts of TQM were being publicized.

The automotive industry began to emphasize Statistical Process Control (SPC). Suppliers and their supplier were required to use these techniques. Other industries and the Department of Defence also implemented SPC. The Malcolm Baldrige National Quality Award was established and became the means to measure TQM. Genechi Taguchi introduced his concepts of parameter and tolerance design and brought about a resurgence of Design of Experiments (DOE) as a valuable quality improvement tool.

Emphasis on quality continued in the auto industry in the 1990s when the Saturn automobile ranked first in customer satisfaction (1996). In addition, ISO 9000 became the worldwide model for the quality management system. ISO 14000 was approved as the worldwide model for environmental management systems. 6Sigma was introduced by Mikel J. Hary and Bill Smith together in Motorola.

The new millennium brought about increased emphasis on worldwide quality and the Internet.

The Start of the Japanese Quality Movement