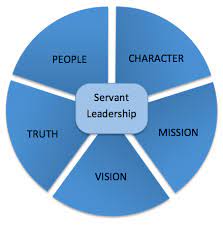 Write a 500-750 word analysis in which you discuss the following:

With a traditional leadership approach, the leader encourages people to do their jobs by providing them with guidance, direction and motivation. The main focus of a traditional leader is to improve the business position of the company or the organization in the market.

Servant leadership occurs when the leader’s main goal and responsibility is to provide service to their people. A servant leader focuses on the people that are directly below them, rather than the company as a whole. In servant leadership, the leader ensures that the followers are growing in all areas — their profession, knowledge, autonomy and even their health and physical development.

Many believe that when leaders shift their focus from the company to the employees, they are more likely to produce skilled, talented, knowledgeable and motivated employees which, in turn, will help to improve the overall operations and management of the organization. This leadership style has gained immense popularity in the world and is adopted by various top-ranking companies. One of the most prominent examples of such a business model is Google. Google takes really good care of its employees and their employee-friendly policies have remarkably increased productivity and revenue.

Where did the term ‘servant leadership’ come from?

The phrase “servant leadership” was coined by Robert K. Greenleaf when he used it for the first time in his essay that was published in 1970. In his essay, Greenleaf explains the term servant leader and talks about the reason for coming up with a new leadership approach.

The popularity of the concept can further be seen in Hermann Hesse’s book The Journey to the East, where the main character Leo acts like a servant and works with them until, one day, he disappears and everyone comes to the realization that nothing is the same without him and he was not a servant but a leader. Leo was seen as a servant throughout, but without him, the team felt lost and realized that he was their actual leader who helped everyone and brought out the best in everyone.

How can one become a servant leader?

Anyone can become a servant leader by demonstrating certain characteristics. Here’s how:

Servant leaders always listen to people before they speak their minds. They want to know what their people think and how they feel. To improve your listening skills, it is important that when you talk to people, you give them your undivided attention and notice their tone and body language while speaking.

Servant leaders feel for their people and don’t turn a blind eye toward their problems and issues. They try hard to resolve those issues by fulfilling the needs and wants of the general public.

3. Heal those around you.

A servant leader is capable of healing people with a focus on their emotional health and a feeling of completeness. This means the leader needs to make sure that people have access to knowledge and resources that enable them to create a healthy and peaceful working environment.

Servant leaders are fully aware of themselves and their people.

5. Persuade without being forceful.

A good leader is capable of convincing people in different ways. Leaders never make use of their authority to make people do something but instead motivate and encourage people to take the desired course of action. A leader is not forceful or bossy.