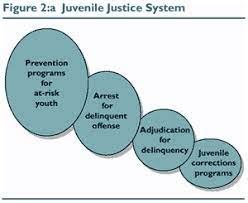 Roles Within the Juvenile Justice System. For this week’s written assignment, please choose one of the roles in the juvenile court system to research (prosecutor, public defender, etc.)

Roles Within the Juvenile Justice System

For this week’s written assignment, please choose one of the roles in the juvenile court system to research (prosecutor, public defender, etc.) and create a 6  slide PowerPoint presentation on that individual’s role and how it relates to the larger juvenile court system.

The Juvenile Justice System
A separate juvenile justice system was established in the United States about 100 years ago with the goal of diverting youthful offenders from the destructive punishments of criminal courts and encouraging rehabilitation based on the individual juvenile’s needs. This system was to differ from adult or criminal court in a number of ways. It was to focus on the child or adolescent as a person in need of assistance, not on the act that brought him or her before the court.

The proceedings were informal, with much discretion left to the juvenile court judge. Because the judge was to act in the best interests of the child, procedural safeguards available to adults, such as the right to an attorney, the right to know the charges brought against one, the right to trial by jury, and the right to confront one’s accuser, were thought unnecessary. Juvenile court proceedings were closed to the public and juvenile records were to remain confidential so as not to interfere with the child’s or adolescent’s ability to be rehabilitated and reintegrated into society.

The very language used in juvenile court underscored these differences. Juveniles are not charged with crimes, but rather with delinquencies; they are not found guilty, but rather are adjudicated delinquent; they are not sent to prison, but to training school or reformatory.

In practice, there was always a tension between social welfare and social control—that is, focusing on the best interests of the individual child versus focusing on punishment, incapacitation, and protecting society from certain offenses. This tension has shifted over time and has varied significantly from jurisdiction to jurisdiction, and it remains today.

In response to the increase in violent crime in the 1980s, state legal reforms in juvenile justice, particularly those that deal with serious offenses, have stressed punitiveness, accountability, and a concern for public safety, rejecting traditional concerns for diversion and rehabilitation in favor of a get-tough approach to juvenile crime and punishment.

This change in emphasis from a focus on rehabilitating the individual to punishing the act is exemplified by the 17 states that redefined the purpose clause of their juvenile courts to emphasize public safety, certainty of sanctions, and offender accountability (Torbet and Szymanski, 1998).

Inherent in this change in focus is the belief that the juvenile justice system is too soft on delinquents, who are thought to be potentially as much a threat to public safety as their adult criminal counterparts.

The federal government has jurisdiction over a small number of juveniles, such as those who commit crimes on Indian reservations or in national parks, and it has its own laws to govern juveniles within its system. States that receive money under the federal Juvenile Justice and Delinquency Prevention Act must meet certain requirements, such as not housing juveniles with adults in detention or incarceration facilities, but it is state law that governs the structure of juvenile courts and juvenile corrections facilities.

When this report refers to the juvenile justice system, it is referring to a generic framework that is more or less representative of what happens in any given state.