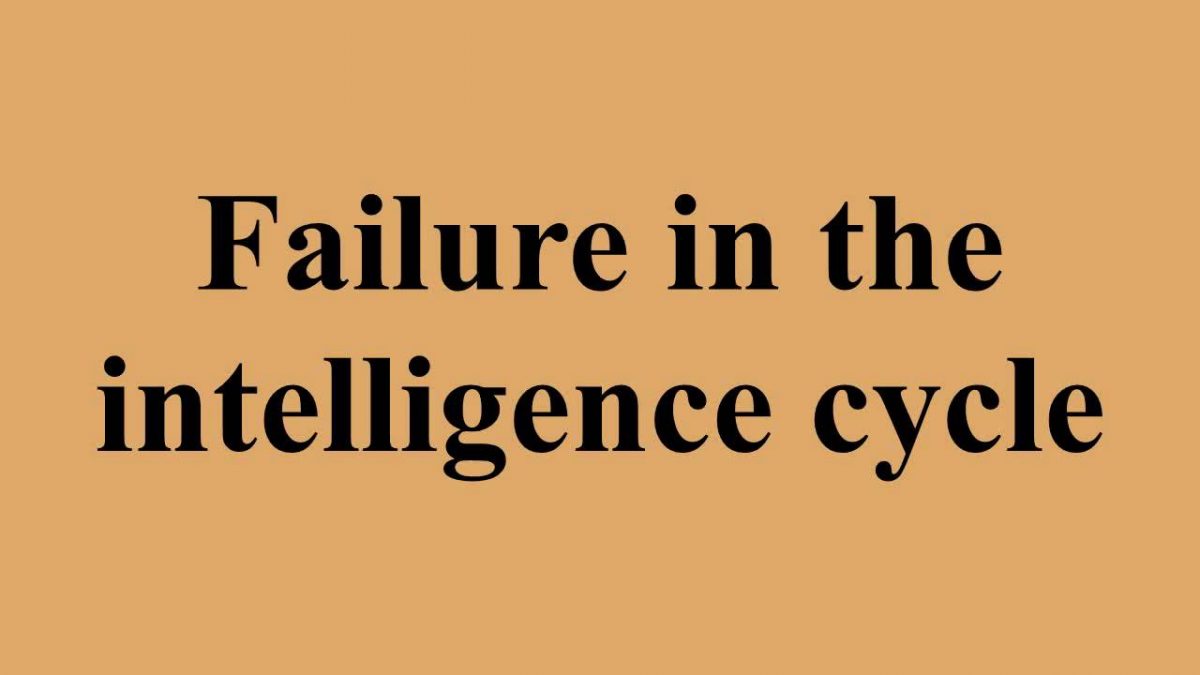 Over the course of the last century, failures in intelligence have happened regularly, sometimes at a significant political loss, and occasionally, resulting in a devastating loss of life such as the terrorist attacks of 11 September 2001 (9/11).  Intelligence failures have been well documented throughout the history of the United States Intelligence Community (IC), and in the case of an earlier intelligence failure at Pearl Harbor, the failure was even the catalyst that brought about the changes that formed the modern IC.

What has not been as well documented or even understood is why these intelligence failures persist after reforms and changes within the IC, almost as if after each failure, reforms are made and then new weaknesses emerge, like playing whack-a-mole.  While the history of these failures is well documented, there is little in the way of a systematic theory to explain why these intelligence failures persist.

Richard K. Betts worked toward developing a theory of intelligence failure in his article “Analysis, War, and Decision: Why Intelligence Failures Are Inevitable”, which established the paradoxes within intelligence that prevent the elimination of failure.[1]  Betts argues that failures in intelligence are not only inevitable but even natural because the failure is primarily a result of politics and psychology, rather than analysis and organization.

Betts’ article was written in the wake of the intelligence failures of the Vietnam War, and the reforms of the IC after the Church Committee inquiries.  While Betts developed a theory of the causes of failure, the areas of error and the imperfect solutions, the discussion of his theory is situated in a particular time and space.  His theory is sound and should withstand application to the challenges of the modern IC in the 21st century.

The aim of this essay is to utilize Betts’ theory of intelligence failure to look at the failure on the part of the IC that resulted in the tragic attacks of 9/11.  First, it will examine the core principles of Betts’ theory of intelligence failure.  Part two will look at the IC in the period prior to 9/11 and pinpoint where the system was broken, which allowed the failure to occur.  Part three will look at the reforms enacted as a result of the findings of the 9/11 Commission Report and the Intelligence Reform and Terrorism Prevention Act of 2004 (IRTPA) to see if the changes are in accordance with Betts’ theory and recommendations.

The essay will finally examine the state of the current IC and determine if intelligence failures are still inevitable as Betts’ theory predicts they will continue to be.

Betts places intelligence failure squarely on the shoulder of the consumer, arguing that, “The most crucial mistakes have seldom been made by collectors of raw information, occasionally by professionals who produce finished analyses, but most often by the decision-makers who consume the products of intelligence services.”  While he does allow room for improvement on the part of the intelligence institutions, Betts argues that failure is political and psychological, rather than the fault of flawed organizations and institutions.

Improvements can be made in the analytic process, but as Betts believes the flaws are political and psychological, it is in these areas he is most critical and offers a framework for understanding where failures occur and solutions to address them, though he readily admits they are imperfect solutions.  Betts recognizes that an empirical study of intelligence failures is well developed, but because lessons are not always learned from mistakes, he tries to create a normative theory to understand why failure occurs and how it can be prevented.

Intelligence fails in three ways, and of these three causes of failure, Betts describes failure in perspective as the most reassuring.  Whereas the nature of success in preventing a quantifiable disaster, a failure is acute and measurable.  Because failure is distinct and tangible, we perceive what we can quantify.  Our failure in perspective is our inability to measure the ratio of intelligence success against failure.  Betts describes this cause of failure as reassuring because there is an implicit ignorance of the picture as a whole; we lose sight of the many daily successes and instead focus on the lone failure.

Betts identifies pathologies in communication as his second cause of failure, which he also considers most common.  Due to gaps in the procedures of transmitting intelligence analysis to policymakers, as well as the struggle to convince policymakers of the importance of the particular intelligence at hand, the structure of the IC is the most often attributed source of failure.

The paradox of perception is that preconceived notions held by either analysts or policymakers impede them from accurately assessing a situation.  Even if the intelligence process can be perfected, the consumption of the intelligence will never be perfected due to psychological limitations and influencing political factors.