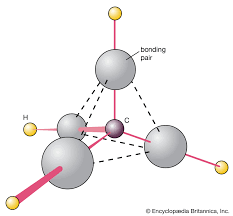 Name and explain the theory that allows scientists to predict the shape of a molecule? How do scientists determine the type of bonds present in a chemical compound?

Predict the shape of a molecule

Name and explain the theory that allows scientists to predict the shape of a molecule? How do scientists determine the type of bonds present in a chemical compound?

Molecular geometry, also known as the molecular structure, is the three-dimensional structure or arrangement of atoms in a molecule.

Understanding the molecular structure of a compound can help determine the polarity, reactivity, phase of matter, color, magnetism, as well as the biological activity.

Then, with the Lewis structure, we apply the valence-shell electron-pair repulsion (VSPER) theory to determine the molecular geometry and the electron-group geometry.

To identify and have a complete description of the three-dimensional shape of a molecule, we need to know also learn about state the bond angle as well. Lewis Electron Dot Structures play crucial role in determining the geometry of molecules because it helps us identify the valence electrons. To learn how to draw a Lewis electron dot structure click the link above.

Now that we have a background in the Lewis electron dot structure we can use it to locate the the valence electrons of the center atom. The valence-shell electron-pair repulsion (VSEPR) theory states that electron pairs repel each other whether or not they are in bond pairs or in lone pairs. Thus, electron pairs will spread themselves as far from each other as possible to minimize repulsion.

VSEPR focuses not only on electron pairs, but it also focus on electron groups as a whole.

The shape of a molecule is determined by the location of the nuclei and its electrons. The electrons and the nuclei settle into positions that minimize repulsion and maximize attraction.

Thus, the molecule’s shape reflects its equilibrium state in which it has the lowest possible energy in the system. Although VSEPR theory predicts the distribution of the electrons, we have to take in consideration of the actual determinant of the molecular shape. We separate this into two categories, the electron-group geometry and the molecular geometry.

Electron-group geometry is determined by the number of electron groups.

The x represents the number of lone pairs present in the molecule. For example, a molecule with two bond pairs and two lone pairs would have this notation: AX2E2.