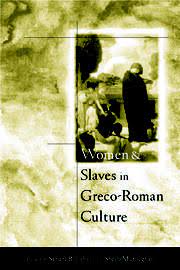 Peter Parish lays out the common ways that writers describe slavery in the American South in Slavery: History and Historians. Parish says recent scholarship on slavery has yielded results.

Parish attemps to describe the condition of slaves at the personal level. He describes various personality archetypes slave owners used to describe their slaves. Parish compares Stanley Elkins’s idea of Sambo as a defensive mechanism. “. . . docile but irresponsible, loyal, but lazy, humble but deceitful – the sterotype of the American slave.” (pp 67) to Charles Joyner’s ideas. Elkins believed the psychological effects of bondage were more to blame for the behavior of slaves, while Joyner looked more to the simple material deprivation. Elkins reinforces the idea that slaveholders hold sole responsiblilty for slave’s pathology. Elkins compared American slavery to the “total instititions” of the concentration camps of Nazi Germany  (pp 68).

Parish then examines the sterotypes mentioned by Blassingame. Blassingame gives two other personality types for slaves, “Nat” and “Jack.” Sambo, goofy but harmless, is thought to be most useful. “Jack” is less so. “Nat,” almost certainly derived from Nat Turner, is the most dangerous. Parish reminds readers that these sterotypes are white inventions used to corral black behavior. (pp 70). Parish discusses the rarity of slave revolts. He says that the lack of major revolts is more a matter of slave practicality than cowardice. Revolts, in the American South, never went very far. (pp 71).

Parish goes on to describe slave religions, and the adoption of Christianity. Historians are divided as to the depth of slave faith. Blassingame says “the church was the single most important institution for the Americanization of the bondsman.” (pp 84). Sterling Stuckey puts less importance on African belief in European Christian faith. He looks to slave Christianity as a front for African-European syncretism. “Christianity provided a protective exterior beneath which more complex, less familiar (to outsiders) religious principles and practices were operative.” (pp 85).

Parish further describes the creation of a seperate, distinct slave culture. Parish cites Lawrence Levine in Black Culture and Black Consciousness as being skeptical of pure African culture surviving in America. Levine seems to think searching for African folkways glosses over the real contributions of black people to a new African-American culture. “The question is not one of survival but of interaction and transformation.” (pp 90).  Parish closes by noting the move from focusing on the wounds caused by slavery, to recognizing the creativity and resiliance of enslaved people (pp 92.)

Vincent Brown’s Tacky’s Revolt: The Story of an Atlantic Slave War goes into great detail about the Coromantee War and Tacky’s Revolt in eighteenth century Jamaica. Tacky’s Revolt follows Wager, a Coromantee slave, John Cope, an English functionary stationed in Africa, and Arthur Forrest, a British adventurer who owned a plantation in Westmoreland. We follow Wager (Apongo) from his arrrival to his execution by Thomas Thistlewood. (Brown, pp 199)

Brown takes the reader to the source of the African slave trade, and examines how it functions. The first chapter, War’s Empire, looks at the Gold Coast. The map on page 24 illustrates the African kingdoms involved, and the European strongholds they serviced. Actually learning about how the Oyo, Dahomey, and Asante traded captives for guns brings some clarity to the whole issue.(pp 25 – 26)

Tacky’s Revolt is dense. Like Berlin, Brown has a heavily sourced book with a great deal of information. Wading through the names and dates can be a slog. The cartographic timelines on page 134 – 135, 170 – 171 and again on page 202 are very helpful. I have not seen a map-timeline hybrid like this before, but it provides a great visual guide for the action.

Tacky’s Revolt, compared to the first three books we have read, is much more coherent. Brown writes the story of Wager’s African and Caribbean world as a narrative, and this makes the writing easier to follow. The timeline skips around, depending on the geographical focus, but this is neccessary for a book of this type. If I had a complaint, it would be the bouncing from Africa, to London, to the Caribbean. Though much more focused than the survey books by Berlin and Gomez, we still jump around quite a bit. But, this book draws a solid picture of the slave society of sugar cane cultivation on Jamaica. The readings are becoming less general, and are starting to zoom in on specific bits of the antebellum world.

I would like to ask one question. I still am fuzzy on the concept of “Coromantee.” The book describes a Coromantee as being from a specific geographic area on the Gold Coast. Brown says “Coromantees spoke more than one language and came from many different regions and kingdoms, from which they brought a variety of historical experiences.” (pp 91) I still cannot tell if “Coromantee” denotes a place, or a station. The book says Coromantees have a special military training, but come from many places. Are they a caste? Do they have a specific rank, like a Sioux war chief? I’m lost, here. If you guys know more from another class, I’d love to hear it. Maybe Dr. Rosa can fill me in.

It seems to be a habit of mine to end with a quote I found fascinating, and I would hate to break with tradition. Often these quotes help me think through big picture historical or moral questions and have been especially helpful in thinking through my thesis. This week I found this sentence to be especially striking:
“In response, late-eighteenth-century abolitionists would rally around the image of a kneeling supplicant begging to be recognized as a man and a brother, as if the condemnation of evil required the meek innocence of its victims.” [emphasis added] (17-18)