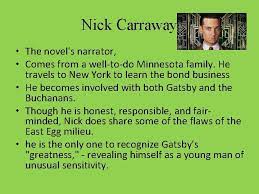 Nick Character in the great Gatsby

Nick Carraway is The Great Gatsby’s narrator, but he isn’t the protagonist (main character).

This makes Nick himself somewhat tricky to observe, since we see the whole novel through his eyes. How can you watch the narrator? This difficulty is compounded by the fact that Nick is an unreliable narrator—basically, a narrator who doesn’t always tell us the truth about what’s happening.

In this post we will explore what we objectively know about Nick, what he does in the novel, his famous lines, common essay topics/discussion topics about Nick, and finally some FAQs about Mr. Carraway.

Our citation format in this guide is (chapter.paragraph). We’re using this system since there are many editions of Gatsby, so using page numbers would only work for students with our copy of the book.

To find a quotation we cite via chapter and paragraph in your book, you can either eyeball it (Paragraph 1-50: beginning of chapter; 50-100: middle of chapter; 100-on: end of chapter), or use the search function if you’re using an online or eReader version of the text.

Nick grew up in the “middle West,” (what we call the Midwest), in a wealthy family that was “something of a clan” (1.5). His family made their money from a wholesale hardware business his grandfather’s brother began after sending a substitute to fight for him in the Civil War. Nick attended Yale, like his father, and then fought in WWI.

Upon his return, he found the Midwest incredibly boring and so set off for New York to become a bond salesman: “I enjoyed the counter-raid so thoroughly that I came back restless. Instead of being the warm center of the world the middle-west now seemed like the ragged edge of the universe—so I decided to go east and learn the bond business” (1.6). Of course, we later find out that Nick’s also getting away from a woman who expects that they’re getting married, but Nick downplays this fact in his narration, which is one of our clues to his dishonesty.

To see how Nick’s background intersects with the stories of the other characters in the novel, check out our Great Gatsby timeline.

In Chapter 1, he is invited to his cousin Daisy Buchanan’s home to have dinner with her and her husband Tom, an old college acquaintance of his. There he meets Jordan Baker, Daisy’s friend and a professional golfer.

In Chapter 2, while hanging out with Tom he ends up being dragged first to George Wilson’s garage to meet Tom’s mistress Myrtle Wilson, and then to the apartment Tom keeps for Myrtle in Manhattan. They invite over a bunch of friends and a drunken party ensues. Nick witnesses some of Tom’s ugliest behavior, including his physical abuse of Myrtle.

In Chapter 3, Nick is invited to attend one of Jay Gatsby’s famous parties. There, he finally meets Gatsby, and also sees Jordan again. After seeing Jordan again at that party, they begin to date, and also does his best to win over her old Aunt, who controls her money. Once he starts dating Jordan he vows to stop sending weekly letters to the woman back in the Midwest. (Though, in typical Nick fashion, he never confirms that he stops sending the letters.) He also mentions a brief affair with a woman in his office that he lets fizzle out.

After meeting Gatsby in Chapter 3 they begin spending time together. In Chapter 4 they drive to Manhattan together. At first he’s pretty wary of Gatsby and his story. This wariness of Gatsby is compounded by Nick’s poor (and very anti-Semitic!) impression of Meyer Wolfsheim, one of Gatsby’s associates. Later in Chapter 4, Nick meets up with Jordan in the plaza hotel and she tells him about Daisy and Gatsby’s romantic history (which she heard all about at the previous party).