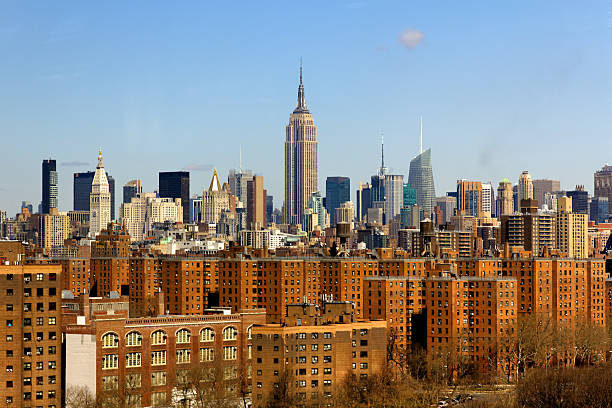 The New York City midtown Manhattan skyline with the landmark Empire State Building in the center and contrasting drab brown apartment blocks in the foreground. Shot from across the East River in early spring.

New York’s Housing Crisis: Why it is so hard to build affordable housing in New York?

New York City has a housing crisis. The shortage of affordable housing and real estate costs mean that people are struggling to pay rent. There is also a lack of affordable housing in the city. This means that there are families that are spending more than 50% of their income on housing. The city’s solution has been to increase the supply of housing. But it is not clear whether we can increase supply to meet the growing demand(NGO , 2022).

The history and reasons behind the housing crisis in New York.

First, the city’s population has been growing rapidly in recent years, while the number of available housing units has not kept pace. This has led to increased competition for housing and higher rents.

Second, wages have not kept pace with the rising cost of living, making it difficult for families to afford basic necessities, let alone housing.

Finally, the lack of affordable housing options has made it difficult for families to find a place to live that is within their budget. The housing crisis in New York is having a profound impact on the city’s residents. Families are forced to relocate to cheaper areas, often outside the city. This can lead to increased commuting costs, as well as a loss of community and support systems. Additionally, the stress of living in an unaffordable housing situation can take a toll on one’s mental and physical health.

The housing crisis in New York is a complex problem that requires a comprehensive solution. The city needs to increase the availability of affordable housing, while also working to improve wages and working conditions for residents. Additionally, the city must do more to support families struggling to afford a house. Only by addressing all of these issues can the city hope to provide its residents with the stability and security they need to thrive.

1. What is the housing crisis in New York?

The housing crisis in New York is a complicated topic but it is easy to understand if you consider that the main problem is a huge demand for housing and a shortage in supply. New York City is a city of immigrants, and it is the most popular destination for immigrants in the U.S. and in the world. Specifically, the New York City metropolitan area is the leading destination in the world for international migrants, with the New York/Northern New Jersey region topping the list of destination American metropolitan areas.

2. What are the causes of the housing crisis?

The housing crisis was the worst financial crisis to hit the United States since the Great Depression era. The main cause of the crisis was the decline in home prices after the housing bubble burst. This led to large numbers of homeowners owing more than the value of their homes, which resulted in a large amount of people going into foreclosure. Many people also invested in real estate without fully understanding the risks involved, which led to a lot of people losing money when the housing market crashed.

There are other many factors that have contributed to the housing crisis.
One of the main causes is the subprime mortgage crisis. This occurred when lenders gave loans to people with poor credit, who then defaulted on their mortgages. This led to a decrease in home values and an increase in foreclosures.

Many of these loans had low-interest rates at first, but the rates were set to increase after a year or two. Because of this, people were unable to afford the higher mortgage payments. This caused many borrowers to default on their loans and lose their homes. ARMs played a huge role in the financial crisis, and we won’t forget them anytime soon.

Finally, the housing market crashed because there were a lot of people buying houses who were not experienced, realtors. Instead of taking the time to learn everything they needed to know, they made the decision to buy a house and lose money in the process. This led to a lot of people losing their financial stability and was terrible for the market.

There were a lot of people who struggled during this time; especially homeowners. If you’re planning on buying a home, make sure you are fully aware of everything you need to know before you buy. It’s recommended that you have your financial records in order and that you fully understand what you’re signing on to before you make an investment.

3. What is the solution to housing crisis?

The New York City Housing Crisis has been going on for a long time. The New York City Council held a hearing on the issue on July 12th, and we have been waiting for a solution for a long time, but it’s not looking likely. So, what is the long-term solution to the New York City Housing Crisis? We’ve got a few ideas that could help. First, we should turn to examples of how this has been done successfully in other cities. Second, we should look to what has already been done in New York City. We think the best solution to this problem is to look at how other cities have successfully built affordable housing and learn from them.

Related Article: The future of policing in America | 3 Best Areas