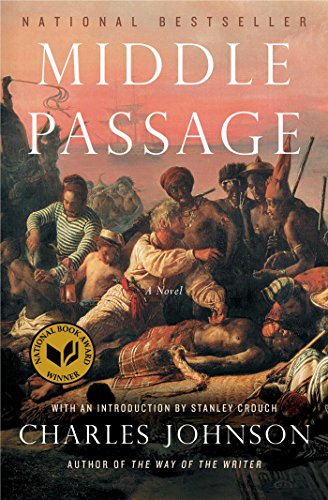 My thought provoking ideas on the Middle Passage film

A darkly poetic evocation of the horrors of the slave trade, embodied in the voyage of one French slave ship across the Atlantic. Rather than present an array of dry facts and figures or risk trivializing history by bending it to the needs of fictitious narrative, Martiniquais filmmaker Guy Deslauriers weaves the raw material of the painful past into an evocative tapestry of images, simultaneously impressionistic and painstakingly detailed.

Though firmly rooted in reality, Deslauriers’s film shares with SANKOFA (1994) and ILL GOTTEN GAINS (1997) their desire to vividly evoke the experience of enslavement through bitter poetry. The titular middle passage was the central leg of an economic triangle dependent on slavery: Finished goods were shipped from Europe to Africa, where they were traded for slaves, mostly from the Western kingdoms (today’s Nigeria, Ghana, Angola and the Ivory Coast); slaves were transported to the Caribbean and Americas and sold for raw materials that were shipped back to Europe.

The film follows one lengthy journey, narrated by the disembodied voice (Djimon Hounsou) of a dead man whose recollections sum up a collective misery and whose recriminations are directed equally at Europeans and at the princes of Africa who collaborated with them. The film opens in modern-day Martinique, but quickly slides into some unspecified time in the past (presumably between the beginning of the 16th century and the middle of the 19th), at the height of the traffic in human flesh and blood.

A French slave ship glides into port to pick up its cargo: men, women and children captured in battle or slaving raids marched hundreds of miles to the coast and then sold by their fellow Africans into lifelong servitude.

“I was traded for a barrel of gunpowder,” the narrator recalls dispassionately. The film records the day-to-day horrors of the trip, which stretches over the course of several months, with an air of sad detachment. Crammed together in the ship’s fetid hold, shackled and unable to sit or stand, the captives suffer beatings, rape, seasickness, death, epidemics, suicidal despair and the overwhelming indignity of being treated as subhuman. Though seldom explicit, the film’s evocation of these degradations is deeply disturbing, and images of the dank wretchedness of the hold are uneasily juxtaposed with shots of the rippling water and clear blue sky.

The result is haunting. In the film’s original version, the voice-over narration was in French; the English-language narration for the U.S. version was written by novelist Walter Mosely.