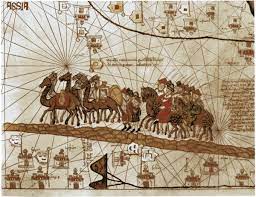 Marco Polo was born around 1254 into a prosperous merchant family in the Italian city-state of Venice. His father, Niccolò, and his uncle Maffeo had left the year before on a long-term trading expedition.

Marco Polo was born around 1254

Upon reaching China, Marco Polo entered the court of powerful Mongol ruler Kublai Khan, who dispatched him on trips to help administer the realm.

Though not the first European to explore China—his father and uncle, among others, had already been there—he became famous for his travels thanks to a popular book he co-authored while languishing in a Genoese prison.

Marco Polo was born around 1254 into a prosperous merchant family in the Italian city-state of Venice. His father, Niccolò, and his uncle Maffeo had left the year before on a long-term trading expedition. As a result, he was raised by extended relatives following his mother’s death at a young age. Niccolò and Maffeo first spent about six years in Constantinople (now Istanbul, Turkey), which had been under Latin control since the Fourth Crusade of 1204. The two brothers then went to the port city of Soldaia (now Sudak, Ukraine), where they owned a house.

Did you know? Christopher Columbus purportedly sailed to the New World with a copy of Marco Polo’s “Travels” in tow. Thinking he would reach Asia and having no idea about the Mongol Empire’s collapse, Columbus marked up the book with notes in preparation for a meeting with Kublai Khan’s descendent.

The Byzantine re-conquest of Constantinople in 1261, along with upheavals in the Mongol Empire, may have blocked their way home. Niccolò and Maffeo therefore turned east in order to trade in such things as silk, gems, furs and spices.

After spending three years in Bukhara in present-day Uzbekistan, they were encouraged by a Mongolian embassy to visit Kublai Khan, grandson of Genghis Khan, who controlled a huge swath of Asia.

Kublai quizzed them on European affairs and decided to send them on a goodwill mission to the pope. In 1269, the two brothers finally made it back to Venice, where Niccolò and Marco Polo met each other for the first time.