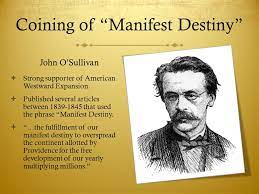 John OSullivan coined the phrase Manifest Destiny in 1845. What did he mean by the phrase, and is there any difference between then and now in how historians apply the term?

What did he mean by the phrase, and is there any difference between then and now in how historians apply the term?

Did the term have an effect on settlers traveling to the West?

What were the motivations and/or philosophy of settlers in the westward expansion?

The term “manifest destiny” was first used by journalist John O’Sullivan in the New York Democratic Review in 1845. O’Sullivan wrote in favor of the U.S. annexing Texas, a region that the U.S. recognized as independent of any other nation. (Mexico maintained that the region was Mexican territory.) For more than 20 years, Anglo-Americans had migrated into the region, bringing ever-increasing numbers of enslaved men and women with them, tying the region to the economics and politics of the U.S.

Sentiment for and against annexation reached fever pitch in 1845 and became a major feature of the presidential election campaigns of Henry Clay and James Polk. It was in this climate that O’Sullivan wrote his column for the July-August edition of the Review. Opponents to annexation, he argued, were trying to stop “the fulfillment of our manifest destiny to overspread the continent allotted by Providence for the free development of our yearly multiplying millions”

In simple terms, Manifest Destiny was the idea that Americans were destined, by God, to govern the North American continent.

In simple terms, Manifest Destiny was the idea that Americans were destined, by God, to govern the North American continent. This idea, with all the accompanying transformations of landscape, culture, and religious belief it implied, had deep roots in American culture. In 1630, John Winthrop, writing decades before the 13 original colonies declared independence, said that the English men and women who hoped to settle New England “shall be as a Citty upon a Hill, the eies of all people are uppon us; soe that if wee shall deale falsely with our god in this worke wee have undertaken and soe cause him to withdrawe his present help from us, wee shall be made a story and a byword through the world” .

The rhetoric of the American Revolution built upon this vision—”the sun never shined on a cause of greater worth,” wrote Thomas Paine in Common Sense. The Revolution was not, he continued, “the affair of a city, a country, a province, or a kingdom, but of a continent”. In 1776, a writer who self-identified as Salus Populi wrote in the New York Packet that, “God has formed America to form the last and best plan that can possibly exist.” Jefferson, looking back on the Revolution during his later years, opined that “this country remains to preserve light and liberty,” in a world marred by political upheaval

By the 19th century, these ideas found additional expression in fictionalized accounts of explorers such as Daniel Boone and Kit Carson, entering the wilderness to triumph over it, while James Fenimore Cooper’s similarly framed “Leatherstocking” tales gained a wide and enthusiastic audience. Even O’Sullivan himself talked about Manifest Destiny in broad terms before he coined that particular phrase: “The expansive future is our arena,” he wrote in 1839. “We are entering on its untrodden space, with the truths of God in our minds. . . . We are the nation of human progress, and who will, what can, set limits to our onward march? Providence is with us, and no earthly power can”

It is important to remember that, as originally conceived, Manifest Destiny was an unabashedly prejudiced idea.

It is important to remember that, as originally conceived, Manifest Destiny was an unabashedly prejudiced idea. It rested upon the sidelining or eradication (both real-world and fictional) of American Indian peoples; there was little place for African Americans (free or enslaved) within the trope; Asian and Hispanic immigrants did not figure in the ideal America it conjured. Catholics were generally ignored; women were deemed unimportant.

The peoples who were meant to conquer the continent were white, Protestant, and overwhelmingly male, with an unquenchable thirst for free enterprise. These are important ideas to keep in mind considering the lingering importance of Manifest Destiny as a concept in American culture. Like Americans before 1845, we may not use the specific words “Manifest Destiny” to describe the belief that America has a unique destiny in the world, but the concept is still at the heart of much U.S. foreign policy, American pop culture, and contemporary political debate.