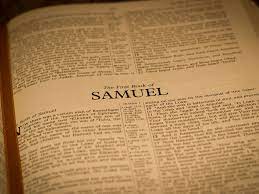 What are the major themes at play in the book of 1 Samuel? How is Samuel as a prophetic figure distinct from the judges and leaders of Israel that preceded him?

Major themes at play in the book of 1 Samuel?

Question 1.  What are the major themes at play in the book of 1 Samuel? How is Samuel as a prophetic figure distinct from the judges and leaders of Israel that preceded him?

Question 2. What are the primary distinguishing factors between the monarchy of Saul and the monarchy of David? What do the differences in scale between the extent of Saul’s rule and that of David’s rule suggest about the transformation of Judah/Israel’s identity between the first two monarchs?

Question 3. What implication did the acquisition of Jerusalem mean for Judah/Israel in terms of the evolution of its religious and political life? In terms of the character of prophetic symbolism?

Respond to each question with one to two full paragraphs in which you critically evaluate the reading material from this week, consider its relevance to the learning objectives, and produce competent, informed reflections on its implication for biblical studies, theology, or Christian ministry, as applicable.

Part 2
Based on the learning resources, how does Samuel facilitate the transition of the period of the judges to the period of the monarchy? Is Saul’s character and abuse of power something that we also witness in “anointed” leaders in our contemporary political and religious spaces?

How does Samuel’s leveraging of critique of power function as a central expression of his prophetic role? How does this differ from popular conceptions of the prophetic in Christian communities today?

Book Summary:
This book begins the 500 year period of the Kings of Israel – approximately between 1050 and 586BC. The book covers a period of 115 years from the birth of Samuel through the turbulent times of Saul to the beginning of David, the king who God chose. Samuel means ‘name of God,’ the life of Samuel is a wonderful study of prayer, as we see his intercessory for Israel and walking intimately with God. Samuel was the last of the judges and first of the prophets.

The Israelites lost the ark of the covenant to the philistines for a little while – “the ark of God was a very poor substitute for the God of the ark.” Charm and talismans don’t bring victory as many people think, giving money or wearing religious symbols don’t make a difference – only a personal relationship with the Son of Love.

If we really mean business we must show it, as Samuel said – “put away your strange God’s” or in other words “cut away” – “if you mean business then God will mean business, religion is not just a matter of emotion but also the will.”

1 Samuel 1:19-1 Samuel 2:11 – The Birth Of Samuel
19 Then they arose early in the morning and worshiped before the Lord, and returned again to their house in Ramah. And Elkanah had relations with Hannah his wife, and the Lord remembered her. 20 It came about in due time, after Hannah had conceived, that she gave birth to a son; and she named him Samuel, saying, “Because I have asked him of the Lord.”

21 Then the man Elkanah went up with all his household to offer to the Lord the yearly sacrifice and pay his vow. 22 But Hannah did not go up, for she said to her husband, “I will not go up until the child is weaned; then I will bring him, that he may appear before the Lord and stay there forever.”

23 Elkanah her husband said to her, “Do what seems best to you. Remain until you have weaned him; only may the Lord confirm His word.” So the woman remained and nursed her son until she weaned him. 24 Now when she had weaned him, she took him up with her, with a three-year-old bull and one ephah of flour and a jug of wine, and brought him to the house of the Lord in Shiloh, although the child was young. 25 Then they slaughtered the bull, and brought the boy to Eli.

26 She said, “Oh, my lord! As your soul lives, my lord, I am the woman who stood here beside you, praying to the Lord. 27 For this boy I prayed, and the Lord has given me my petition which I asked of Him. 28 So I have also dedicated him to the Lord; as long as he lives he is dedicated to the Lord.” And he worshiped the Lord there.