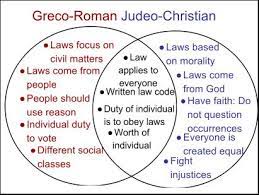 The contributions from of judeo Christian and Greco Roman societies in the development of democracy. What did they do or believe in and that we do or believe now in democratic societies …

The contributions from of judeo Christian and Greco Roman societies in the development of democracy. What did they do or believe in and that we do or believe now in democratic societies concentrate on their views of law reasons faith and individual responsibilities.

Even though ancient Greek, ancient Roman, Jewish and Christian beliefs differed greatly from each other, these religious traditions have blended to form the foundation for Western civilization. The holidays, architecture, calendars, literature and work schedules of the Western world reflect the influences of Greco-Roman and Judeo-Christian religions and philosophies.

Ancient Greek religion was polytheistic, meaning it believed in many gods. Those who believed in the gods erected temples in their honor and gave thanks to them in return for the gifts the gods bestowed on humans. Cities in Greece were often named for, or dedicated to, certain gods. For example, the patron goddess of Athens was Athena. However, not all ancient Greek philosophers believed in the gods. Socrates, who influenced the likes of Plato and Aristotle, was killed for allegedly rejecting the pantheon.

2Beliefs of the Roman Empire

The Roman beliefs that stuck with Western civilization borrowed from the Greek and Etruscan civilizations. The Etruscan civilization was the dominant civilization of Italy prior to the Roman empire. Therefore, Roman gods have names that developed from Etruscan and Latin lineages, but appearances and personalities that correspond with Greek gods. Roman gods that have parallels in the Greek pantheon include Minerva, whose Greek counterpart is Athena. Unlike Greece, however, Rome had a clear religious hierarchy in the form of state-appointed religious leaders.

Judaism is a monotheistic religion, believing in one god. The Jewish God is an omnipotent, omniscient and omnipresent being. The main religious texts of Judaism include the Torah, the Tanakh and the Talmud. The Torah includes the first five books of the Hebrew Bible; the Tanakh includes the Hebrew Bible; and the Talmud is a rabbinical supplement to the Torah. An important belief of traditional Judaism is that a messiah will eventually come to Earth to fulfill a spiritual mission.

Christians believe that a messiah already came, and his name was Jesus. Depending on the denomination, Jesus is either God incarnate or His first creation. Though Christianity accepts many of the scriptures and beliefs of Judaism, it does not adhere to certain Old Testament laws still followed by Orthodox Jews, such as abstinence from pork. Christianity is also less associated with the people of Israel, though people of many ethnic backgrounds also practice Judaism.