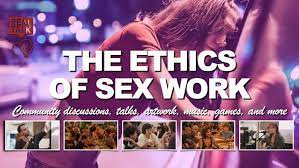 Is Sex Work Ethical? “The United States has some of the world’s most sweeping laws against prostitution, with more than 55,000 arrests annually, more than two-thirds of which involve women.

“The United States has some of the world’s most sweeping laws against prostitution, with more than 55,000 arrests annually, more than two-thirds of which involve women. Women of color are at higher risk of arrest. (In New York City, they make up 85 percent of people who are arrested.) So are trans women, who are more likely to do sex work because of employment discrimination.” The New York Times

In your second paper, you are charged with examining the ethical arguments for and against sex work.  Because there are many ways into this topic, you will first need to decide what aspect of this topic you are going to take on.  The thinking questions below will help to guide you toward your topic.

It is important to note that ethics and morality are intertwined.  As you write, be aware of where and how you encounter ethics and different systems of morality.  You will likely need to point out and analyze the difference between ethical and moral behavior for your reader to ensure that your argument is clear.  Please define your terms as needed.

RESEARCH:  This is the first of your papers that requires research.  You must include some research about sex work in your paper.  This can be from academic sources, news media, documentaries, or personal accounts from sex workers.  This list is not exhaustive – use your best judgement when it comes to choosing reliable resources.  Because this is the first of your papers to require research, the quality of your research (including citations) will be incorporated into your grade.

As you begin to think about the different ways to discuss the ethics of sex work, you might consider the following questions and topic ideas to get started.  This is by no means an exhaustive list of topics.  If you’re having trouble coming up with a topic, please ask for help.

– Should sex work be legal in the United States?

– How do laws regarding sex work differ from country to country?

– What social supports and services are available to sex workers in other countries?

– How is mental health impacted by sex work?

– What are the ways in which sex work differs depending on gender identity?

– How can sex work be empowering?

– How has sex work changed with the birth of social media and internet culture?

– Is sex work harmful?  In what ways?  Who is being harmed?

– Should sex workers have the same rights as other workers?  (Unions, workers compensation, etc.)

This essay has three goals: to practice topic formation, to practice writing a clear and convincing argument, and to engage with outside sources in a meaningful way. It is up to you to choose what aspect of sex work that you want to examine and perhaps argue for or against.

Sex Work, the term is prevalent indeed and also an extremely controversial topic in our society today. It drives men to pay for it, and women to sell it. Sex work can include phone sex operations, exotic dancing, nude webcam modeling, escort services, adult film performances, nude peepshows, massage parlor work, brothel work, prostitution and many more. Sex work comes in different forms and has been a familiar practice since ancient times.

However, there are constitutional challenges in every country regarding sex work. For example, Canada’s sex work laws are persistently being challenged. As Sampson reflects in his work, the possible options available for reform in prostitution law in Canada in the aftermath of the Bedford case, I will further analyze the competing models proposed and reflected upon Sampson’s proposals for change and whether I agree with these approaches.

Firstly, it is important to know the history and background of prostitution in Canada. Before the Bedford challenge, sex work in Canada was actually legal. However, what seemed disconcerting and contradicting was the fact that most of these laws showed that any activity related to prostitution is illegal. The stigma shown here discriminates against sex workers and also in a way, allows people to get away with things like exploitation, harassment, humiliation, and physical abuse.

It is fairly obvious that sex work is contentious and that people all over the world are extremely opinionated when it comes to this topic. Nevertheless, when disregarding different beliefs and moral arguments, every human being has the right to voice out their opinions and have their human rights respected in Canada. Therefore, Bedford’s case focuses on the Courts and whether Canadian laws follow the Constitution and protect human rights of those engaging in sex work.

There are four main components in the Criminal Code that is related to prostitution. These include Section 210, which is the “Bawdy-house law”, Section 211, again, “Bawdy-house law”, Section 212, “Procurement law”, and Section 213, “Communicating Law”. This is related to the Bedford v. Canada case because it challenged the four sections of the Criminal code mentioned. It is crucial that the Canadian government takes responsibility in ensuring that laws do not violate the rights of Canadian citizens under the Charter.

In the article, “The Obscenities of this Country”: Canada v. Bedford and the Reform of Canadian Prostitution Laws, by Lauren Sampson, she introduces the story behind the search for illegal weapons that belonged to several missing women who were prostitutes and ended up being killed. This happened on February 2002, where a pig farmer from Port Coquitlam offered both drugs and money to the women working in East-hastings, Downtown Vancouver as prostitutes.

He would then bring them back to his farm and not only torture these women, but kill them. After Pickton’s trial, it was revealed that 65 women had gone missing in Vancouver and the Vancouver Police Department was to blame for in their poor investigations over the last two decades. This case led sex worker activists to blame and criticize Canada’s prostitution laws.

Sampson states that prostitution has never been criminalized in Canada, however, the Criminal Code does however penalize being in a common “bawdy-house”. Many activists argued that although these actions are created to protect exploitation against women, it also prevented women from being able to protect themselves.

The reason for this is that sex workers or prostitutes are not allowed to hire anyone to provide them with security. They were not even allowed to work indoors due to the fear that they would be charged with being in a “brothel”.

The Bedford case first started in 2008 and it argued that sections 210, which is the “Bawdy house law”, and section 213, which is the “communicating law”, violated sex worker’s rights under the charter for two main reasons.

The first one being the protection for their physical and mental well-being, and the second being the freedom of expression in the sense that they are unable to talk to any of their clients on the streets about their services, prices, etc.

Therefore, the case argued that the laws presented should permit sex workers to make their work as safe as possible and that the laws now are contributing significantly to the violence and abuse towards sex workers.

There are several options that are available for reform in prostitution laws in Canada. Sampson looks at the competing models that are possible for change. She discusses the Swedish legal system adapated by Canadian Bill C-36 and the problems with this system. She also proposes alternative legal, social and political solutions surrounding sex work.

Moreover, Sampson states that the Bedford decision is definitely not perfect, however, it is nonetheless a representation of the Canadian civil rights movement that can continue to empower sex workers in three pivotal ways. Personally, I also think the Bedford decision is ideal, even though it invalidated existing laws that do not articulate positive rights for sex workers. Sampson also criticizes the Conservative-Nordic plan and states that it is even more flawed in comparison to the Bedford decision which I agree with. Every plan and decision has both its advantages and disadvantages, however, they all aim to empower and better the lives of sex workers in different ways.