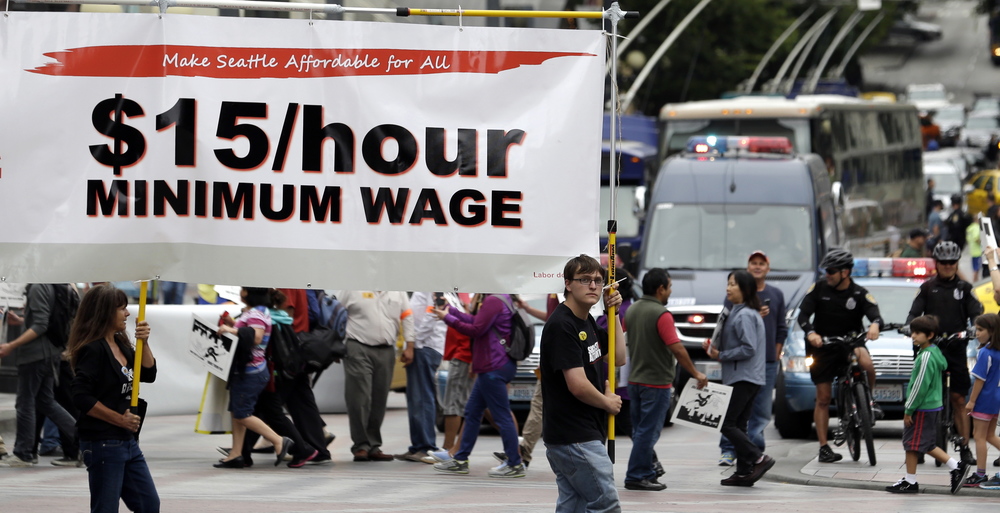 In this photo taken, Aug. 1, 2013, demonstrators protesting what they say are low wages and improper treatment for fast-food workers march in downtown Seattle. In an interview with The Associated Press, Mayor Mike McGinn said he thought $15 was a fair starting point for the minimum wage discussion. McGinn challenger Ed Murray recently announced that he would push for a $15 minimum wage but planned to proceed with a phased-in approach. Washington already has the nation's highest state minimum wage at $9.19 an hour. (AP Photo/Elaine Thompson, File)

Increases in the minimum wage due inflation discussion

Many people argue that we should be careful about sharp increases in the minimum wage because of the resulting inflation (higher labor costs equal higher consumer prices) and layoffs. Others believe that the minimum wage is too low to support families and should be raised to keep up with the cost of living.

Take one side of the issue, and argue for it with strong supporting facts or reasons.
> Support your response with examples from your experiences, observations, or readings.

There are few political arguments more polarizing than raising the federal minimum wage.

The current federal minimum wage, which sits at $7.25 an hour, hasn’t been raised since 2009. Democrats have proposed raising the wage to $15 an hour in the next stimulus package. And although the Senate parliamentarian has declared it cannot be passed through the budget reconciliation process, House Democrats are still leaving the language in the bill in hopes of getting it passed one way or another.

A closer look at the debate around raising the minimum wage reveals how arcane the surrounding research is. For every argument in favor of raising the wage, there seems to be an equally appealing argument against it.

But when looking at the bigger picture—who the minimum wage impacts, who would benefit from raising it, how it currently compares with inflation and its long-term effects for the economy—one thing is clear: An increase at the national level is overdue.

The Effects of Raising the Minimum Wage

Many arguing against raising the minimum wage point to potential job losses that will result from businesses absorbing the costs of having to pay employees more. However, different analysts may come to very different conclusions about potential job losses, based on what model that they use. A recent report from the Congressional Budget Office (CBO) estimated 1.4 million jobs would be lost (0.9 percent of employment) by the time the federal minimum wage reaches $15 in 2025 and would increase the federal deficit by $54 billion over the next 10 years due to increased spending on federal programs, such as Medicaid.

Arindrajit Dube, a professor of economics at the University of Massachusetts and a research associate at the National Bureau of Economic Research argues that the CBO’s estimates are wrong due to its methodology, and the overall research that a minimum wage hike’s effects on employment are difficult to accurately pin down. He estimates that a national minimum wage increase to $15 per hour, using the CBO report’s evidence, would lead to just under 500,000 lost jobs.

“…The report’s assumptions about job losses are problematic — significantly out of step with modern research on the subject,” Dube writes in a recent op-ed for the Washington Post. He claims the report only looks at a select sample of studies to draw its conclusions and is inconsistent with the formula it uses to calculate its estimates.

Daniel Kuehn, research associate at The Urban Institute, says the overall consensus of the effects of minimum wage are that yes, it will result in jobs lost—but the number of jobs it removes from the economy aren’t statistically significant (although they come at a human cost that’s harder to quantify). Employers could also absorb the wage hike costs in other ways, such as reducing fringe benefits (such as free meals for restaurant servers or employee discounts for retail servers).

But what about those memes of a minimum wage hike turning your $7 Big Mac meal into a $20 splurge? Is that true? According to Kuehn, it’s also unlikely to happen.