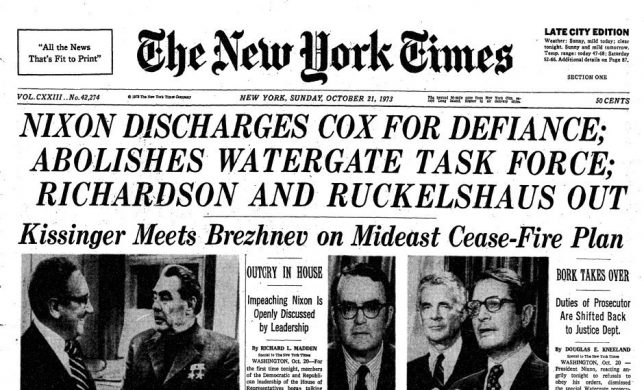 Impact of the Saturday Night Massacre in October 1973.

Impact of the Saturday Night Massacre in October 1973

1. Discuss the impact of the Saturday Night Massacre in October 1973. What role did the tapes play in destroying the Nixon presidency?
2. What were the causes of the Korean War? How did it affect United States foreign policy? What precedents did it set?
What was the significance of the conflict between President Truman and General Douglas MacArthur?

What Was the Saturday Night Massacre?

One of the most controversial episodes of the Watergate scandal, the so-called “Saturday Night Massacre” came on October 20, 1973, when embattled President Richard Nixon fired Special Prosecutor Archibald Cox and accepted the resignations of Attorney General Elliot Richardson and Deputy Attorney General William Ruckelshaus.

The “massacre” stemmed from an inquiry into the notorious June 1972 break-in at the Watergate complex, in which five Nixon operatives were caught trying to bug the Democratic National Committee headquarters. Archibald Cox, a Harvard law professor and former U.S. solicitor general, was tapped to investigate the incident in May 1973. He soon clashed with the White House over Nixon’s refusal to release over 10 hours of secret Oval Office recordings, some of which implicated the president in the break-in.

Nixon’s attack on his own Justice Department came with grave consequences. More than 50,000 concerned citizens sent telegrams to Washington, and 21 members of Congress introduced resolutions calling for Nixon’s impeachment.

In the face of overwhelming protest, Nixon relented and appointed Leon Jaworski as the new Watergate prosecutor. Jaworski resumed the investigation and eventually secured the release of the Oval Office recordings in July 1974, when the Supreme Court ruled the tapes did not fall under executive privilege. Faced with the so-called “Smoking Gun” of his involvement in Watergate, Nixon announced his resignation from the presidency on August 8, 1974.