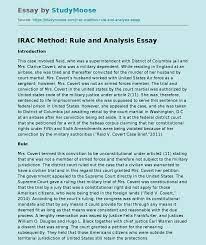 You can structure your response to a business law essay question using the IRAC method. The issue, rule, analysis, and conclusion make up the fundamental structure. You can be sure that your response is comprehensive if you use this straightforward framework for structuring it.

Issue: Declare the problem raised by the essay question at the outset of your response. Sometimes the query will tell you what the problem is. If not, query: What is the legal query whose resolution will determine the case’s outcome? The issue should be presented as a question that is specific rather than broad. For example, “Is there an agency relationship if no remuneration was paid?” is a valid topic. The question “Will the plaintiff win?” is inappropriate. Be aware that the issue can be case-specific, naming the parties and describing the particulars of the case.

Given that Jones acted on behalf of XYZ and adhered to its directions, did he have an agency relationship with XYZ Corp? Any situation that poses the same question falls inside the purview of the problem. Example: “When an employment relationship exists, does an agency also exist?” Most cases only have one problem. If there are multiple issues to be addressed, then you must create an IRAC analysis for each issue separately.

Rule: The rule specifies the law or standard that governs the situation. The rule should not be used as a conclusion to the specific case being discussed, but rather as a general principle. An acceptable regulation might read, for instance, “An agency relationship is created when there is an understanding that the agent would act on behalf of the principal at the principal’s direction or control regardless of whether pay is received.” The rule that reads, “The plaintiff was the defendant’s agent,” is inapplicable.

Don’t mention the parties’ names or other specific case details. Hint: Frequently, the rule will be the explanation of the legal doctrine that governs the situation. Without a specific agreement to the contrary, an agent is not permitted to utilize or reveal confidential information obtained through the agency.

Analysis: The analysis is the most significant and time-consuming component of your response. Applying the Rule to the specifics of the issue or query is involved. To demonstrate how the rule leads to the conclusion, you should use the facts. If at all feasible, talk about the case from both perspectives. Important: Give explanations for your conclusions in addition to your conclusions.

A conclusion devoid of justification or justification implies that you did not analyze the problem using the rule and the evidence. Hint: You can use the rule as a framework for your debate. Example: Consider the question of A’s status as an independent contractor.

Explain whether or not the case’s facts fall under the definition of an independent contractor using the following information: “In this instance, A had little influence over her employment because the foreman informed her what to wear, how to use the equipment, and when to report to work each day.” If the rule is a test with several factors, you must examine each factor and explain how the facts satisfy (or do not satisfy) each one.

Conclusion: You respond to the issue in the end. Describe the findings of your analysis.

Examples are “Smith is responsible for negligence” and “X and Y did not enter into a legally binding contract.” There must be several conclusions if there are several concerns.

SAMPLE IRAC ANALYSIS
The ABC Corporation employed Caroline as a receptionist. Her station was at the front of the corporate building, and her responsibilities included greeting visitors, taking calls, sorting mail, and answering questions about ABC in general. One day, a representative of XYZ Insurance Co. visited ABC to offer them a new customer opportunity while all of the management were out of the office.

He explained to Caroline that he was interested in learning if ABC would be open to dropping its current employee health insurance plan and switching to a plan offered by XYZ.

Caroline informed him that none of the ABC management were present, but the XYZ salesman went into great length about his company’s health insurance program. The XYZ representative instantly prepared a contract for Caroline to sign when Caroline reacted by saying that the XYZ plan seemed better than the current ABC plan. Caroline reluctantly agreed to take XYZ’s insurance plan by signing the contract. Is ABC subject to the agreement if XYZ wants to enforce it against it?

She had the freedom to take whatever action that was logically related to carrying out those tasks. She was not given explicit permission to sign contracts, and her responsibilities as a receptionist did not include or imply signing contracts. Caroline therefore lacked the legal power to obligate ABC to the agreement.

When the principal’s actions, previous transactions, or communications lead a third party to reasonably believe that the agent is authorized to act or do something, that situation is known as apparent authority. In this instance, ABC failed to inform XYZ that Caroline was authorized to sign an insurance contract, and there is no evidence to imply that ABC and XYZ had previously conducted business.

Since Caroline worked as a receptionist, it was not fair for the XYZ representative to assume that she had the authority to choose and approve the health insurance plans for ABC’s employees. This is because of the nature of the role and typical responsibilities. Caroline therefore didn’t seem to have the right to approve the deal. The contract is not enforceable against ABC Corp. since Caroline lacked the legal capacity to sign it, either explicitly or implicitly.

EXPLANATION
The primary issues that need to be solved are listed first. The relevant legal principles or standards that should be applied in examining the situation are then described. The legal standard or rule of law is applied to the facts. It should be noted that the facts are not merely reiterated; rather, they are connected to specifics of the rule or test as support for and justification of the conclusion that there is no real authority.

Conclusion regarding the initial problem.
The general legal principle that will be used to examine the following problem is provided. The facts are used to apply the rule. Keep in mind that the information mentioned relates to the definition of perceived authority. The second issue’s conclusion. A general conclusion is made about the liability issue.