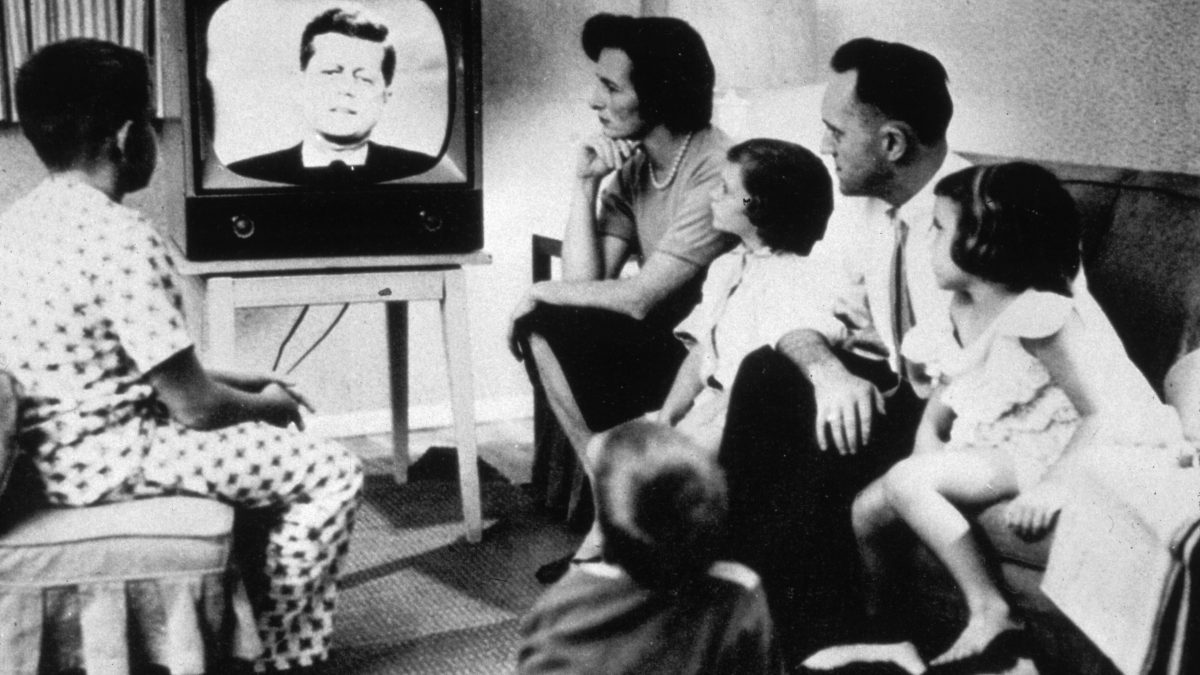 circa 1962: A family watching President John Kennedy on television. (Photo by MPI/Getty Images)

Television struggled to become a national mass media in the 1950s, and became a cultural force – for better or worse – in the 60s. Before these two decades were over the three national networks were offering programs that were alternately earth shaking, sublime and ridiculous.

In the 1940s, the three networks – NBC, CBS and ABC – were “networks” in name only. All of the programming originated, live, in New York. The only way the networks had to distribute the shows to the rest of the nation was to point a film camera at a television screen and convert video to film. These 16mm films, known as kinescopes, were then duplicated and shipped to the few affiliated stations for broadcast later. By necessity, most programming was local, and cooking shows, wrestling and cartoons took up most of the broadcast day.

The networks became true networks when AT&T finished laying a system of coaxial cables from coast to coast. Coax – the now familiar cables the run from cable TV wall outlets to today’s tuners – has enough bandwidth, or electrical carrying capacity, to transmit hundreds or even thousands of telephone calls as well as television signals.

In 1952 for the first time, television news was able to broadcast the Republican and Democratic conventions live from Philadelphia to the rest of the nation. The importance of that event for rural America went beyond the fact that rural residents knew in real time that Dwight D. Eisenhower and Adlai Stevenson were running for President against each other.

Television programming has had a huge impact on American and world culture. Many critics have dubbed the 1950s as the Golden Age of Television. TV sets were expensive and so the audience was generally affluent. Television programmers knew this and they knew that serious dramas on Broadway were attracting this audience segment. So, the producers began staging Broadway plays in the television studios. Later, Broadway authors, like Paddy Chayefsky, Reggie Rose and J. P. Miller wrote plays specifically for television. Their plays – Marty, Twelve Angry Men, and Days of Wine and Roses, respectively – all went on to be successful movies.

As the households with TVs multiplied and spread to other segments of society, more varied programming came in. Situation comedies and variety shows were formats that were borrowed from radio. Former vaudeville stars like Milton Berle, Sid Caesar and Jackie Gleason found stardom after years of toiling on the stages. Ernie Kovacs was one of the first comedians to really understand and exploit the technology of television and became a master of the sight gag.

During the 50s, quiz shows became popular until a scandal erupted. For three years, producers of “The $64,000 Question” supplied an appealing contestant with the answers to tough trivia questions to heighten the drama.

During this time, many of the genres that today’s audiences are familiar with were developed – westerns, kids’ shows, situation comedies, sketch comedies, game shows, dramas, news and sports programming.

In the 1950s and 60s, television news produced perhaps some of its finest performances. Edward R. Murrow exposed the tactics of innuendo and unsubstantiated charges that Sen. Joseph McCarthy used to exploit the country’s fear of Communism. The televised debates between Kennedy and Nixon were credited with giving JFK a slim election victory.

Filmed coverage of the civil rights movement and live coverage of Martin Luther King’s March on Washington brought those issues into sharp focus.