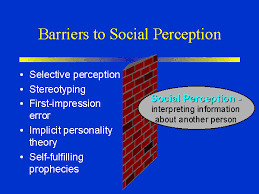 How to overcome types of barriers at work

In the perceptual process, several barriers can be identified that inhibit the accuracy of our perception. These barriers are (1) stereotyping, (2) selective perception, and (3) perceptual defense. Each of these will be briefly considered as it relates to social perception in work situations

One of the most common barriers in perceiving others at work is stereotyping. A stereotype is a widely held generalization about a group of people. Stereotyping is a process in which attributes are assigned to people solely on the basis of their class or category. It is particularly likely to occur when one meets new people, since very little is known about them at that time.

On the basis of a few prominent characteristics such as sex, race, or age, we tend to place people into a few general categories. We ascribe a series of traits to them based upon the attributes of the category in which we have put them. We assume that older people are old-fashioned, conservative, obstinate, and perhaps senile. We view professors as absentminded, impractical, idealistic, or eccentric.

One explanation for the existence of stereotypes has been suggested by Jain, Triandis, and Weick.

They argue that stereotypes may be to some extent based upon fact. People tend to compare other groups with their own group, accentuating minor differences between groups to form a stereotype. For example, older people as a group may indeed be more conservative or more old-fashioned. These traits then become emphasized and attributed to particular older individuals.

found that there are still clear stereotypes of older employees. They are thought to be (1) more resistant to organizational change, (2) less creative, (3) less likely to take calculated risks, (4) lower in physical capacity, (5) less interested in learning new techniques, and (6) less capable of learning new techniques.

When asked to make personnel decisions concerning older people, the business students generally followed several trends. First, they gave older people lower consideration in promotion decisions. Older people also received less attention and fewer resources for training and development. Finally, older people tended to be transferred to other departments instead of confronted by their superiors when a problem with their performance emerged.

Similar problems arise for people from different racial or cultural backgrounds and for gender. A particular problem in many companies today is that of attitudes toward women as managers or executives. Although succeeding in a managerial position is always difficult, the job is all the harder if your coworkers, superiors, or subordinates are not supportive.

To See Ourselves as Others See Us

In considering stereotyping in organizations, it may be interesting to examine how people in different countries and cultures see others around the world. Specifically, we should note that “foreigners” often hold certain stereotypes of what a “typical” American looks and acts like. Look, for example, at (Figure). This table shows how people in seven countries around the globe view the typical American. Note the sizable differences in perceptions.

When examining these comments, consider the extent to which you think these perceptions and stereotypes are accurate or inaccurate. Why do people in different countries form such divergent opinions of our country? How do their perceptions color the behavior and effectiveness of American managers working abroad? On the basis of this assessment, you might want to reassess your own stereotypes of people in different countries. How accurate do you think your own stereotypes have been?

Selective perception is the process by which we systematically screen out information we don’t wish to hear, focusing instead on more salient information. Saliency here is obviously a function of our own experiences, needs, and orientations. The example of the Dearborn and Simon

study of managers described earlier provides an excellent glimpse of selective perception. Production managers focused on production problems to the exclusion of other problems. Accountants, personnel specialists, and sales managers were similarly exclusive. Everyone saw his own specialty as more important in the company than other specialties.

Another example of selective perception in groups and organizations is provided by Miner.

Miner summarizes a series of experiments dealing with groups competing on problem-solving exercises. Consistently, the groups tended to evaluate their own solutions as better than the solutions proposed by others. Such findings resemble a syndrome found in many research organizations. There is a frequent tendency for scientists to view ideas or products originating outside their organization or department as inferior and to judge other researchers as less competent and creative than themselves. This is often referred to as the “Not-Invented-Here” syndrome. Similar patterns of behavior can be found among managers, service workers, and secretaries.

A final barrier to social perception is perceptual defense.

In other words, through perceptual defense we tend to distort or ignore information that is either personally threatening or culturally unacceptable. Because emotionally disturbing stimuli have a higher recognition threshold, people are less likely to fully confront or acknowledge the threat. Instead, they may see entirely different or even erroneous stimuli that are safer. Even so, the presence of the critical stimulus often leads to heightened emotions despite the lack of recognition.

For instance, suppose that during a contract negotiation for an assembly plant, word leaked out that because of declining profits, the plant might have to close down permanently. Anxious workers might ignore this message and instead choose to believe the company management is only starting false rumors to increase their leverage during wage negotiations. Even if the leverage claim is accepted by the workers as truth, strong emotional reactions against the company can be expected.

One effect of perceptual defense is to save us from squarely facing events that we either do not wish to handle or may be incapable of handling. We dissipate our emotions by directing our attention to other (substitute) objects and hope the original event that distressed us will eventually disappear.