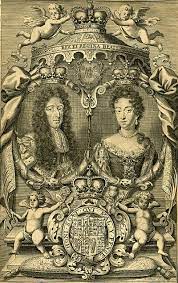 How did the glorious revolution impact English government and political views?  To what extent did religion play in colonizing the Americas such that it influenced the call for separation between State and religion in present-day USA?

How did the glorious revolution impact English government and political views?

Answer each with 250 words each

How did the glorious revolution impact English government and political views?

To what extent did religion play in colonizing the Americas such that it influenced the call for separation between State and religion in present-day USA?

How did the Native Americans React to European settlers How did they feel getting kicked out of their land, and forced into a religion? How does this translate today in their society and history?

The Glorious Revolution was a bloodless coup that took place from 1688-1689, in which Catholic King James II of England was deposed and succeeded by his Protestant daughter Mary II and her Dutch husband, Prince William III of Orange. Motivated by both politics and religion, the revolution led to the adoption of the English Bill of Rights of 1689 and forever changed how England was governed. As the Parliament gained more control over the previously absolute authority of the royal monarchy, the seeds of modern political democracy were sown.

When James II took the throne of England in 1685, already tense relations between Protestants and Catholics were growing worse. A devout Catholic himself, James expanded freedom of worship for Catholics and favored Catholics in appointing military officers. James’ apparent religious favoritism, along with his close diplomatic ties with France, angered many of the English people and drove a dangerous political wedge between the monarchy and the British Parliament.

In March 1687, James issued a controversial Royal Declaration of Indulgence suspending all laws punishing Protestants who rejected the Church of England. Later the same year, James II dissolved Parliament and tried to create a new Parliament that would agree never to oppose or question his rule according to the “divine right of kings” doctrine of absolutism.

James’ Protestant daughter, Mary II, remained the only rightful heir to the English throne until 1688, when James had a son, whom he vowed to raise as a Catholic. Fear soon arose that this change in the line of royal succession would result in a Catholic dynasty in England.

In Parliament, James’ stiffest opposition came from the Whigs, an influential political party whose members favored a constitutional monarchy over James’ absolute monarchy. Having failed in an attempt to pass a bill to exclude James from the throne between 1679 and 1681, the Whigs were especially outraged by the potential long line of Catholic succession to the throne posed by his reign.

James’ continued efforts to advance Catholic emancipation, his unpopular friendly relationship with France, his conflict with the Whigs in Parliament, and uncertainty over his successor to the throne fanned the flame of revolution.

In 1677, James II’s Protestant daughter, Mary II, had married her first cousin William III, then the Prince of Orange, a sovereign principality now part of Southern France. William had long planned to invade England in an effort to oust James and prevent the Catholic emancipation. However, William decided not to invade without some level of support within England itself. In April 1688, seven of King James’ peers wrote to William pledging their allegiance if he invaded England. In their letter, “The Seven” stated that “much the greatest part of the [English] nobility and gentry” were unhappy with James II’s reign and would align with William and his invading forces.

Emboldened by the pledge of support from dissatisfied English noblemen and prominent Protestant clergy, William assembled an impressive naval armada and invaded England, landing in Torbay, Devon, in November 1688.

James II had anticipated the attack and had personally led his army from London to meet William’s invading armada. However, several of James’ soldiers and family members turned on him and pledged their allegiance to William. With both his support and his health failing, James retreated back to London on November 23, 1688.

In what appeared to be an attempt to retain the throne, James offered to agree to a freely elected Parliament and to grant a general amnesty to all who had rebelled against him. In reality, however, James was stalling for time, having already decided to flee England. James feared that his Protestant and Whig enemies would demand that he be executed and that William would refuse to pardon him. In early December 1688, James II officially disbanded his army. On December 18, James II safely fled England, effectively abdicating the throne. William III of Orange, greeted by cheering crowds, entered London the same day.

In January 1689, a deeply divided English Convention Parliament met to transfer the crowns of England, Scotland, and Ireland. Radical Whigs argued that William should reign as an elected king, meaning his power would be derived from the people. Tories wanted to acclaim Mary as queen, with William as her regent. When William threatened to leave England if he was not made king, Parliament compromised on a joint monarchy, with William III as king, and James’ daughter Mary II, as queen.