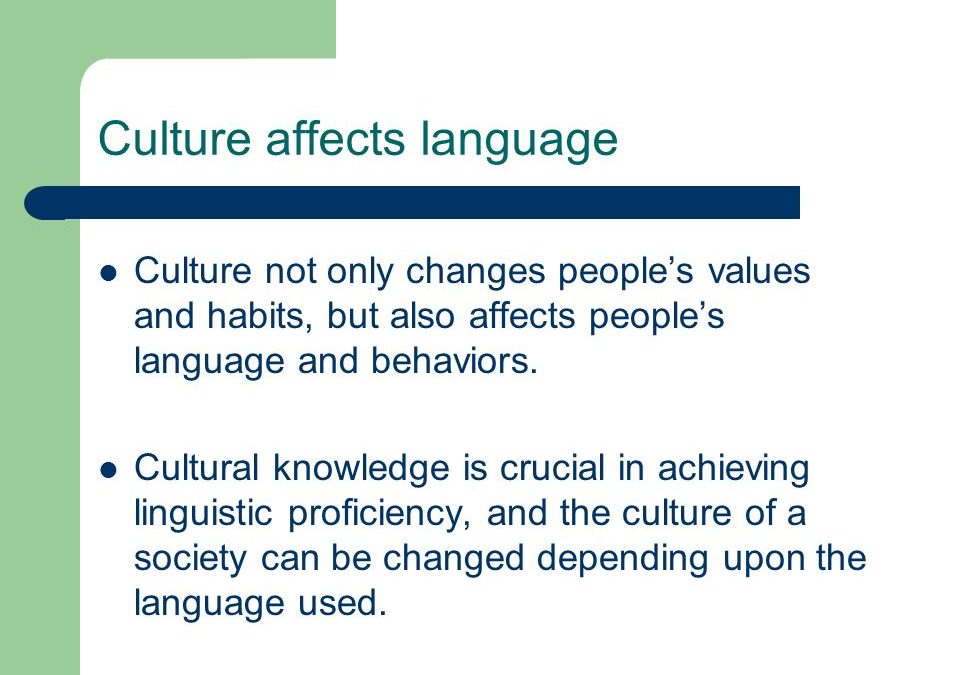 Culture not only changes people’s values and habits, but also affects people’s language and behaviors. Cultural knowledge is crucial in achieving linguistic proficiency, and the culture of a society can be changed depending upon the language used.

How culture influences language and language influence culture. What are the ways in which language is changing in the United States?

How Does Culture Influence Language?

Culture influences the language that is spoken within its constraints as a society, such as how certain words are used in support of the culture. It’s through language that members of a specific culture communicate with each other and create bonds with each other. Language is a way that others identify specific cultures, be it based on a geographical regional culture, or a social culture based on ideology. The culture develops its own language and has nuances accompanied by forms of group body language and voice inflections.

The influence of culture on language is seen through instances of certain words specific to a region that defines its culture. A prime example can be found in the United States with the use of words that mean, you all. Each variation of this phrase is a dialect that readily identifies the region.

Beyond phrases and expressions of a culture, it is easy to see how cultures don’t stray from their own language. For example, you wouldn’t hear a Southerner say, “Youse missed a great ball game last night” any more than you’d hear a New Yorker ask, “Ya’ll going to the game tonight?”

Expectations Within a Culture

It’s safe to assume that a culture has its own set of expectations and traditions, such as the type of language used within it. Like other nuances within a culture, language isn’t something each person thinks about, it is simply part of their culture. As the culture evolves, the language grows to accommodate cultural changes and vice versa.