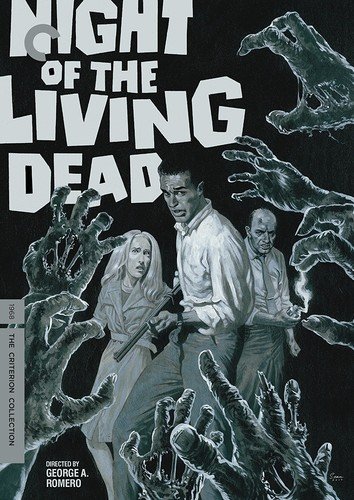 Think about the specific cinematic elements (direction, script, acting, editing, etc) as you craft your review. You are required to cite the film on a Works Cited page; you must also cite one other external review from a newspaper, magazine, website, or other source. Remember that your final draft should be 2-4 pages (not counting WC page), MLA format, typed, DS, etc

Bickering siblings Johnny and Barbra are traveling by car to a rural cemetery, where they visit their father’s grave. Johnny complains that the drive is too long for the simple act of placing a flowered cross on the grave. Johnny teases his sister’s fear of the cemetery after dark, saying “They’re coming to get you, Barbra!” They are approached by a tall, pale-faced man who stumbles toward them and suddenly attacks Barbra. Johnny pulls the man off of Barbra and struggles with him, but is knocked unconscious and possibly dead after the man thrusts Johnny’s head violently on the edge of a gravestone. The man then pursues Barbra back to the car, but Barbra cannot start it without Johnny’s keys.

She takes the car out of gear and it begins to drift away on its own, but she accidentally steers it into a tree. She abandons the car and runs down a roadway to a nearby farmhouse, with the man still pursuing her. She discovers the house seemingly deserted, and the phone is out of order. Her attacker stumbles around the outside of the house looking for her, and is joined by several others. They all seem to be in a kind of trance. Exploring the house further, Barbra makes a gruesome find at the top of the stairs: a human body that seems to have been partially devoured by something.

In a panic and attempting to flee the house, Barbra is intercepted by Ben, who arrives in a pickup truck and attacks the mysterious figures with a tire iron. Barbra is further driven into hysteria when she sees Ben violently smashing the skulls of the strange men who keep trying to get into the house. Ben urges her into action and the two of them begin boarding up the doors and windows from the inside with dismantled furniture and scraps of wood.

They awkwardly trade their stories; Ben seems to be a drifter who was passing through the area when suddenly a wave of unexplained violence began unfolding. He tells Barbra about a scene of mayhem that he encountered at a diner, and Barbra tells him about the incident with Johnny in the cemetery. When Barbra becomes hysterical and wants to go out after Johnny, she strikes Ben and Ben hits her in the face. Barbra passes out in shock.

Ben finds a rifle and a radio as Barbra lies incapacitated on a couch in the living room listening to the radio report. Emergency broadcasters tell stories of widespread violence and mayhem being committed by people who seem to be in a ‘trance’. Ben continues to board up the doors and windows with anything he can find: he finds a hammer and nails and uses the interior doors, part of a dining table and an ironing board.

He also makes a lucky find with a lever-action rifle and cartridges. Suddenly, Barbra is startled when the cellar door opens and two men emerge from the basement. Ben is attracted by her screams and they confront the newcomers. An older middle-aged man introduces himself as Harry Cooper, and the younger man is named Tom. Harry says that he has his wife, Helen, and his daughter, Karen, are in the basement as well. Karen has been hurt and cannot be moved. Tom has a girlfriend named Judy, also in the cellar.

Immediately the group begins bickering. Ben is furious with Tom and Harry for not coming out earlier to help him barricade the house. Harry is an irrational and domineering man who insists that they all barricade themselves in the cellar and wait for help. Ben refuses, saying that if their attackers ever got into the cellar, it would be the end of all of them, as there is only one entrance — if they stay upstairs they have a “fighting chance” to hold off their attackers outside. Harry angrily says he’s going back to his family in the basement and will barricade the door.

Ben angrily agrees, saying that he’ll defend everything in the upper part of the house. Tom calls his girlfriend Judy upstairs. Harry bars the door while Tom tries to reason with him, saying they can defend the house if they all work together. Harry gloats that they’ll be safer down there, but when Helen learns about the group and that they have a radio that keeps them informed, she insists that they go upstairs into the house to help out.