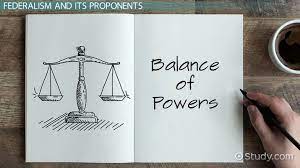 Examine the Concept of Federalism and what causes Friction in the US System.  Discuss Federalism. How does it work? How are powers and responsibilities divided among levels of government in unitary, confederate, and federal systems of government?

Examine the Concept of Federalism

1) Examine the Concept of Federalism and what causes Friction in the US System.  Discuss Federalism. How does it work? How are powers and responsibilities divided among levels of government in unitary, confederate, and federal systems of government? Describe the major sources of friction and conflict between the federal and state levels of government that have arisen over time. Be sure to include policy examples to illustrate your answer.

2) Participation in Government.
Participation is believed to be necessary and good for democracy. However, there are positive and negative aspects associated with increased participation. Evaluate some of the advantages and disadvantages associated with increased citizen participation. Why do people participate in the political process? In your discussion, be sure to include a description of the various potential responses to dissatisfaction in the community and the general demographic and contextual factors that have been linked to participation. Given your discussion, what might governments do to increase citizen participation? Consider also initiatives and how they affect democracy? Lastly, how do the Internet, social medial, and e-government connect the public with government?

What precisely is American federalism? In their seminal work on federal jurisdiction, Felix Frankfurter and Wilber Katz allude to a “dynamic struggle” between federal and state power, the ebb and flow of competing, sometimes conflicting, spheres of federal and state power and influence. In many respects, the story of American government is the story of how that struggle has been resolved.

The antecedents of American federalism trace to colonial days, when the concept of divided sovereign power began to take shape. At the beginning of the Revolutionary War, the thirteen colonies declared themselves to be free and independent states. During the hostilities and at the War’s end, the newly formed states recognized that they needed to operate together to function adequately on the new national stage and to enter the world stage.

America’s first attempt to codify federalism — the Articles of Confederation of 1781 — failed. Replaced by the Constitution of 1787, this sturdy document and the government it established have survived the tenuous early days of the Republic, a Civil War, serious economic depressions, America’s involvement in two World Wars, and 227 years of innumerable internal and external challenges. This paper briefly outlines how American federalism developed and how it serves as the basic organizing principle of American government.

Reflecting on America’s early political development, Alexis de Tocqueville commented that “[i]n America . . . it may be said that the township was organized before the county, the county before the state, the state before the union.” 2 America’s earliest political associations were forged at a local level. Early colonists found themselves separated from their sovereign’s authority and protection by a vast ocean and from their fellow colonists by a vast geographic expanse. As a consequence, they organized and largely governed their day-to-day lives independently and locally.