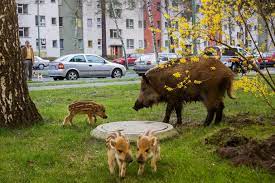 Does living in the urban environment affect the behaviour of wild animals towards people? Animals increasingly share human-built environments, but how this has affected their behaviour remains a key question in urban ecology.

Does living in the urban environment affect the behaviour of wild animals towards people?

Topic: Does living in the urban environment affect the behaviour of wild animals towards people?

Animals increasingly share human-built environments, but how this has affected their behaviour remains a key question in urban ecology
This project will explore if/how living in anthropogenic environments affects animals’ antipredator responses to humans (including animals’
ability to use human gaze as a measure of risk).

Particularly suitable study species are squirrels and jackdaws. A good comparison would be between populations in the Alton Estate and Richmond Park, but any other appropriate sites can be considered.

As cities expand to accommodate a growing human population, their impacts to natural ecosystems and the wildlife residing within them increase. Some animals that persist in urban environments demonstrate behaviors distinct from their non-urban counterparts.

These potential behavioral changes are the subject of a growing body of research in the areas of wildlife ecology, biology, and conservation. In spite of increasing urban wildlife research, studies focused specifically on changing behavior in urban mammals is limited.

We conducted a systematic literature review to synthesize current research on behavior changes in wild urban mammals. We included 83 papers published between 1987 and March 2020.

Omnivores were the leading subject of study, closely followed by carnivores and the specific behaviors most widely studied were home range and vigilance. Among the reviewed studies, there were 166 observations of 44 distinct behaviors with 155 occurrences of behavior change relative to conspecifics in non-urban areas. The most commonly studied and observed type of behavior change was alert behavior.

Our results highlight the need for long-term wildlife behavior studies across a variety of urban settings to promote successful urban wildlife management and conservation.

As learning and behavioral adjustments are the primary ways animals cope with changing environments, the highly modified urban landscape provides a veritable proving ground for the ability of wildlife to adapt (Brown, 2012; Greggor et al., 2016).

Efforts to promote urban biodiversity while minimizing human-wildlife conflict will require a comprehensive understanding of what behavior changes are occurring in urban wildlife and how these species are potentially adapting over time.

Although behavior change can occur in wildlife without adaptation, it is helpful to consider behavioral responses, in terms of timescale and permanence, as either regulatory, acclimatory, or developmental (Lopez-Sepulcre and Kokko, 2012; McDonnell and Hahs, 2015).

Where behavior changes fall among these three categories of adaptative response can offer insight into the mechanisms of change and whether behaviors may revert to population norms or progress toward permanent adaptation (Dingemanse et al., 2010; McDonnell and Hahs, 2015).

Regulatory responses such as changes in alert behavior like harm avoidance or decreased flight initiation distance (FID) often develop within seconds to hours, whereas acclimation (e.g., adjustments in social structures and territoriality) may develop gradually over days and weeks (Bateman and Fleming, 2012; McDonnell and Hahs, 2015).

These adaptive responses may complement species survivability in some cases while being detrimental in others (Lopez-Sepulcre and Kokko, 2012; Lowry et al., 2013; Robertson, 2018; Ellington and Gehrt, 2019). As humans continue to alter the habitat and resources available to urban wildlife, knowing how these animals are adapting their behavior is key to understanding how certain species will persist in urban environments (Ryan and Partan, 2014; Soulsbury and White, 2015).

This is somewhat surprising as changes in mammalian behavior can often be precursors to conflict with humans and understanding how mammals use urban areas is an important component of wildlife management (Gehrt and McGraw, 2007; Karelus et al., 2017).

Although selective urban pressures can have contrasting effects among mammalian species, it appears that behavioral flexibility among mammals allows them to better adapt to the urban environment (Santini et al., 2019).

These changes can lead to adaptations that may have important eco-evolutionary consequences. Despite the importance of understanding behavior changes in urban mammals, there has been no comprehensive review of the current primary literature specific to urban mammal behavior.