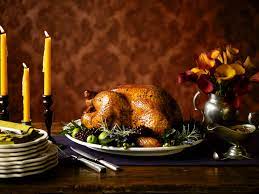 Do you think that we should be commemorating and celebrating the Pilgrims on Thanksgiving? Explain. Painting showing Pilgrims feeding Native Americans on the first Thanksgiving

Do you think that we should be commemorating and celebrating the Pilgrims on Thanksgiving?

Accessible American History I raise the question of whether or not Thanksgiving should be viewed as our nation’s Founder’s Day. I also compare the Pilgrims with the English colonists who came here 13 years before the Pilgrims: the founders of Jamestown.

That famous Thanksgiving meal that Pilgrims shared with the Wampanoag Indians was more than just a harvest festival celebrating their survival of that first (bad) winter. It was also the forging of a military alliance between the two peoples. In those early days, the Plymouth settlers needed the help of local Indians, and the Wampanoag thought that these newcomers could be useful in their conflicts with other tribes.

What is your opinion of the painting below, which is a depiction of that famous Thanksgiving meal? (Does it seem accurate? Explain.)  How do you think Native Americans might feel about this painting? Explain. Do you think that we should be commemorating and celebrating the Pilgrims on Thanksgiving? Explain.

Should We Celebrate Thanksgiving and the Pilgrims?

The decision to celebrate Thanksgiving divides Indigenous peoples. Jacqueline Keeler wrote a widely circulated editorial about why she, a member of the Dineh Nation and Yankton Dakota Sioux, celebrates the holiday. For one, Keeler views herself as “a very select group of survivors.” The fact that natives managed to survive mass murder, forced relocation, theft of land, and other injustices “with our ability to share and to give intact” gives Keeler hope that healing is possible.

In her essay, Keeler takes issue with how one-dimensionally Indigenous peoples are portrayed in commercialized Thanksgiving celebrations. The Thanksgiving she recognizes is based on historical facts:

“These were not merely ‘friendly Indians.’ They had already experienced European slave traders raiding their villages for a hundred years or so, and they were wary—but it was their way to give freely to those who had nothing. Among many of our peoples, showing that you can give without holding back is the way to earn respect.”

Award-winning author Sherman Alexie, Jr., who is Spokane and Coeur d’Alene, also celebrates Thanksgiving by recognizing the contributions the Wampanoag people made to the Pilgrims. Asked in a Sadie Magazine interview if he celebrates the holiday, Alexie humorously answered:

“We live up to the spirit of Thanksgiving cuz we invite all of our most desperately lonely white [friends] to come eat with us. We always end up with the recently broken up, the recently divorced, the brokenhearted. From the very beginning, Indians have been taking care of brokenhearted white people. We just extend that tradition.”

If we’re to follow Keeler’s and Alexie’s lead, Thanksgiving should be celebrated by highlighting the contributions of the Wampanoag. All too often, however, Thanksgiving is celebrated from a Eurocentric point of view. Tavares Avant, former president of the Wampanoag tribal council, cited this as an annoyance about the holiday during an ABC interview:

“It’s all glorified that we were the friendly Indians and that’s where it ends. I do not like that. It kind of disturbs me that we…celebrate Thanksgiving…based on conquest.”

Schoolchildren are particularly vulnerable to being taught to celebrate the holiday in this manner. Some schools, however, are teaching more historically accurate, revisionist Thanksgiving lessons. Teachers and parents can influence the way children think about Thanksgiving.

An anti-racist organization called Understanding Prejudice recommends that schools send letters home to parents addressing efforts to teach children about Thanksgiving in a manner that neither demeans nor stereotypes Indigenous peoples. Such lessons could include discussions about why not all families celebrate Thanksgiving and why the representation of Indigenous peoples on Thanksgiving cards and decorations is usually hurtful.

The organization’s goal is to give students accurate information about Indigenous peoples of the past and present while dismantling stereotypes that could lead children to develop racist attitudes. “Furthermore,” the organization states, “we want to make sure students understand that being an Indian is not a role, but part of a person’s identity.”

The National Day of Mourning kicked off unintentionally in 1970. That year a banquet was held by the Commonwealth of Massachusetts to celebrate the 350th anniversary of the Pilgrims’ arrival. The organizers invited Frank James, a Wampanoag man, to speak at the banquet. Upon reviewing James’ speech—which mentioned European settlers looting the graves of the Wampanoag, taking their wheat and bean supplies, and selling them as enslaved people—banquet organizers gave him another speech to read that left out the gritty details of the first Thanksgiving, according to UAINE.

Rather than deliver a speech that left out the facts, James and his supporters gathered at Plymouth, where they observed the first National Day of Mourning. Since then, UAINE has returned to Plymouth each Thanksgiving to protest how the holiday has been mythologized.

In addition to resenting misinformation about Thanksgiving, some Indigenous peoples don’t recognize it because they give thanks year-round. During Thanksgiving 2008, Bobbi Webster of the Oneida Nation told the Wisconsin State Journal that the Oneida have 13 ceremonies of thanksgiving throughout the year.

Anne Thundercloud of the Ho-Chunk Nation told the Journal that her people also give thanks continually, so a single day of the year for thanksgiving clashes with Ho-Chunk tradition. “We’re a very spiritual people who are always giving thanks,” she explained. “The concept of setting aside one day for giving thanks doesn’t fit. We think of every day as Thanksgiving.”

Thundercloud and her family have incorporated the fourth Thursday of November into the other holidays observed by the Ho-Chunk, the Journal reports. They extend Thanksgiving observance until Friday when they celebrate Ho-Chunk Day, a large gathering for their community.

If you celebrate Thanksgiving this year, ask yourself just what you’re celebrating. Whether you choose to rejoice or mourn on Thanksgiving, initiate discussions about the holiday’s origins by focusing on what the day meant for the Wampanoag and what it continues to signify for Indigenous peoples today.