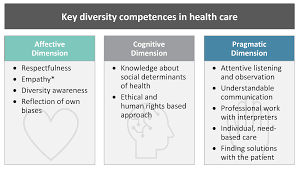 How to contribute to the development of a diverse and inclusive learning community in health informatics in Nursing.  How would the approach to course design take into account considerations of diversity

How to contribute to the development of a diverse and inclusive learning community in health informatics in Nursing.

How would the approach to course design take into account considerations of diversity.

Developed a statement that reflects a strength related to diversity, inclusion, and equity in nursing field.

Workplace diversity is becoming increasingly important in Canadian health care settings. As the nursing workforce and demographic patterns change, it is important for nurse leaders to understand and influence staff with various values, beliefs, and expectations. In this chapter, we first review cultural diversity, ethnicity, race, cultural competency, and cultural safety.

Second, we explore the differences between cultural competency and cultural safety. Third, we present theories that can be used to guide the implementation and delivery of culturally competent nursing care.

We review the role of nurse managers in supporting the implementation of culturally competent care with clients and within health care organizations. Finally, we will discuss how diversity applies to new generations and see how intergenerational conflicts arise from different cultural beliefs. We conclude with strategies for managing workplace diversity.

The influx of immigrants to Canada has been characterized by sustained immigration and an increased diversification of immigrants, which has been designed to meet Canada’s economic needs and to provide a welcome refuge for vulnerable refugees.

The number of new immigrants and their geographical locations could affect the ethnocultural diversity of various regions in Canada. For example, the top ten countries from which immigrants come to Saskatchewan have been Philippines, India, China, Pakistan, Ukraine, United Kingdom, United States, Bangladesh, Iraq, and South Africa (The Canadian Magazine of Immigration, 2016). Such changes to the cultural reconfiguration of the prairie landscape will affect workplace diversity.

These changes have led to a growing challenge in nursing leadership related to the management of a culturally diverse work environment.

Cultural and generational differences related to attitudes, beliefs, work habits, and expectations have proven to be challenging for nurse leaders (Kramer, 2010) and will continue to be a critical managerial and leadership priority.

Demographics, language, education, cultural, gender, race, and generational differences are factors that have increased conflict within health care teams, which is associated with burnout and decreased job satisfaction (Almost, 2006; Mortell, 2013).

When conflict and disharmony occur within a team, the nurse leader plays a significant role. Results of misunderstandings and misinterpretations related to cultural and generational differences can be costly to organizations as they can result in increased absenteeism, decreased staff satisfaction, and decreased quality patient care (Weingarten, 2009).

Canada, the United States, and European nations are presently facing a migration crisis of a magnitude that has not been seen since the massive population displacements of the post–World War II era (Fleras, 2015).

Due to the effects of globalization, economic policies, financial constraints, and forced migrations due to environmental or armed conflicts, nurses are providing health care to very diverse and sometimes vulnerable populations such as refugees and asylum seekers (Racine & Lu, 2015).

On the other hand, globalization also brings increased ethnic and cultural diversity within health care organizations, which affects the way nurses deliver care and how they interact with nurses coming from other countries.

More than ever, nurses must be culturally competent and culturally safe in their everyday practice regardless of the health settings in which they work. Similarly, nurse managers need to understand their roles in supporting cultural competency and safety at both the individual and the organizational level.

Cultural competency and cultural safety are key skills for nurses to acquire and sustain. The Canadian Nurses Association, the Canadian Association of Schools of Nursing, the American Nurses Association, the American Organization of Nurse Executives, and the US Office of Minority Health are among the major regulatory nursing bodies and organizations that recognize the moral and ethical duty of nurses to advocate for and provide culturally competent care.