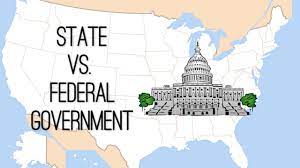 Part b. Discuss the relationship of the federal and state governments. Which tasks/powers are allocated to the states? Terms to include: Federalism, dual federalism, reserved powers, article 1 section 8, necessary and proper clause, supremacy clause

Discuss the relationship of the federal and state governments

Part b. Discuss the relationship of the federal and state governments. Which tasks/powers are allocated to the states? Terms to include: Federalism, dual federalism, reserved powers, article 1 section 8, necessary and proper clause, supremacy clause
Part b. What are some of the current federal/state issues addressing the question of Federalism?
Current examples….. (Abortion, gun rights, immigration, mask mandate, cannabis etc.)

Federalism — the Relationship between Federal and State Government

In the United States, the government operates under a principle called federalism. Two separate governments, federal and state, regulate citizens.

A system of government in which the people are regulated by both federal and state governments.

Powers of the Federal Government

Matters that are not within the express or implied powers of the federal government are generally left to the states to regulate. The Tenth Amendment to the U.S. Constitution provides, “The powers not delegated to the United States by the Constitution, nor prohibited by it to the States, are reserved to the States respectively, or to the people.”

Powers given to Congress that are spelled out in the Constitution.

The power that Congress has to regulate that is derived from the express powers.

As a practical matter, however, the power of the federal government to pass laws and to regulate is extensive. One reason for this is that the Supreme Court has given a broad interpretation to the Commerce Clause. This clause gives the federal government the right to regulate interstate commerce. In the past, the Court has liberally interpreted this power. For example, Congress used this section to justify numerous laws, including civil rights legislation.

Powers of the State Government

States have very broad powers to make laws that apply within the state boundaries. States are said to have general police powers. This means that states can make laws that provide for the general health, welfare, and safety of its citizens. However, they cannot make laws that conflict with federal laws. Nor can states enact any laws in areas that are preempted by the federal government.

Preemption means that the federal government has the exclusive right to regulate a particular subject area.

Some subject areas that cannot be regulated by states are set out in Article I, Section 10 of the Constitution and include such activities as entering into treaties, coining money, and passing ex-post facto laws.

Ex post facto laws make a person criminally responsible for an act that was committed before the act was made a crime.

Areas commonly regulated by states include criminal conduct, contractual relationships, civil tort liability, and forms of business such as partnerships and corporations.

A doctrine referring to the right of the federal government to be the exclusive lawmaker in certain areas.

The authority of states to make laws that provide for the general health, welfare, and safety of its citizens.

“After the fact”; refers to laws that impose criminal responsibility for acts that were not crimes at the time the acts occurred.