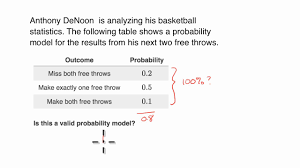 Part (a): Create a discrete probability distribution using the generated data from the following simulator: Anderson, D. Bag of M&M simulator. New Jersey Factory. Click on the simulator to scramble the colors of the M&Ms. Next, add the image of your generated results to the following MS Word document:  Discrete Probability Distributions Discrete Probability Distributions – Alternative Formats . Use the table in this document to record the frequency of each color. Then, compute the relative frequency for each color and include the results in the table.

Part (b): Compute the mean and standard deviation (using StatCrunch or the formulas) for the discrete random variable given in the table from part (a). Include your results in the MS Word document.

Part (d): Comment on your findings in your initial response and respond to at least 2 of your classmate’s findings.

What Is Discrete Distribution?

Statistical distributions can be either discrete or continuous. A continuous distribution is built from outcomes that fall on a continuum, such as all numbers greater than 0 (which would include numbers whose decimals continue indefinitely, such as pi = 3.14159265…). Overall, the concepts of discrete and continuous probability distributions and the random variables they describe are the underpinnings of probability theory and statistical analysis.

Statisticians can identify the development of either a discrete or continuous distribution by the nature of the outcomes to be measured. Unlike the normal distribution, which is continuous and accounts for any possible outcome along the number line, a discrete distribution is constructed from data that can only follow a finite or discrete set of outcomes.

Discrete distributions thus represent data that has a countable number of outcomes, which means that the potential outcomes can be put into a list. The list may be finite or infinite. For example, when studying the probability distribution of a die with six numbered sides the list is {1, 2, 3, 4, 5, 6}. A binomial distribution has a finite set of just two possible outcomes: zero or one—for instance, lipping a coin gives you the list {Heads, Tails}. The Poisson distribution is a discrete distribution that counts the frequency of occurrences as integers, whose list {0, 1, 2, …} can be infinite.

The most common discrete probability distributions include binomial, Poisson, Bernoulli, and multinomial.

The Poisson distribution is also commonly used to model financial count data where the tally is small and is often zero. For one example, in finance, it can be used to model the number of trades that a typical investor will make in a given day, which can be 0 (often), or 1, or 2, etc. As another example, this model can be used to predict the number of “shocks” to the market that will occur in a given time period, say over a decade.

Another example where such a discrete distribution can be valuable for businesses is inventory management. Studying the frequency of inventory sold in conjunction with a finite amount of inventory available can provide a business with a probability distribution that leads to guidance on the proper allocation of inventory to best utilize square footage.

The binomial distribution is used in options pricing models that rely on binomial trees. In a binomial tree model, the underlying asset can only be worth exactly one of two possible values—with the model, there are just two possible outcomes with each iteration—a move up or a move down with defined probabilities.