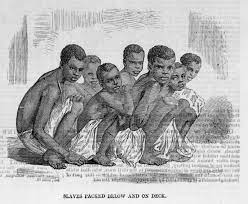 Describe the travel conditions of slaves during their middle passage. Was there any difference between the treatments of the two genders?  Explain.

Describe the travel conditions of slaves during their middle passage

Alexander Falconbridge,  An Account of the Slave Trade on the Coast of Africa (London: 1788).

Alexander Falconbridge served as a surgeon, or doctor, on British slave ships on four voyages between 1780 and 1787. In 1788, he wrote An Account of the Slave Trade on the Coast of Africa, which became an influential book in the abolitionist movement.

In 1791, he was selected by the Anti-Slavery Society to reorganize a failed settlement of freed slaves in Freetown, Sierra Leone, on the western coast of Africa. But the colony was a failure, and Falconbridge died an alcoholic in 1792.

As soon as the wretched Africans, purchased at the fairs, fall into the hands of the black traders, they experience an earnest of those dreadful sufferings which they are doomed in future to undergo.

And there is not the least room to doubt, but that even before they can reach the fairs, great numbers perish from cruel usage, want of food, travelling through inhospitable deserts, etc.

They are brought from the places where they are purchased to Bonny, etc. in canoes; at the bottom of which they lie, having their hands tied with a kind of willow twigs, and a strict watch is kept over them. Their usage in other respects, during the time of passage, which generally lasts several days, is equally cruel.

Their allowance of food is so scanty, that it is barely sufficient to support nature. They are, besides, much exposed to the violent rains which frequently fall here, being covered only with mats that afford but a slight defense; and as there is usually water at the bottom of the canoes, from their leaking, they are scarcely every dry.

Nor do these unhappy beings, after they become the property of the Europeans (from whom as a more civilized people, more humanity might naturally be expected), find their situation in the least amended.

Their treatment is no less rigorous. The men Negroes, on being brought aboard the ship, are immediately fastened together, two and two, by hand- cuffs on their wrists, and irons riveted on their legs.

But at the same time, they are frequently stowed so close, as to admit of no other posture than lying on their sides. Neither will the height between decks, unless directly under the grating, permit them the indulgence of an erect posture; especially where there are platforms, which is generally the case.

These platforms are a kind of shelf, about eight or nine feet in breadth, extending from the side of the ship towards the centre. They are placed nearly midway between the decks, at the distance of two or three feet from each deck. Upon these the Negroes are stowed in the same manner as they are on the deck underneath.

By this means fifty or sixty, and sometimes more, are fastened to one chain, in order to prevent them from rising, or endeavoring to escape. If the weather proves favorable, they are permitted to remain in that situation till four or five in the afternoon, when they are disengaged from the chain, and sent down.

…Upon the Negroes refusing to take sustenance, I have seen coals of fire, glowing hot, put on a shovel, and placed so near their lips, as to scorch and burn them.

And this has been accompanied with threats, of forcing them to swallow the coals, if they any longer persisted in refusing to eat. These means have generally had the desired effect.

I have also been credibly informed that a certain captain in the slave trade poured melted lead on such of the Negroes as obstinately refused their food.

Exercise being deemed necessary for the preservation of their health, they are sometimes obligated to dance, when the weather will permit their coming on deck. If they go about it reluctantly, or do not move with agility, they are flogged; a person standing by them all the time with at cat-o’-nine-tails in his hand for that purpose.

Their music, upon these occasions, consists of a drum, sometimes with only one head; and when that is worn out, they do not scruple to make use of the bottom of one of the tubs before described.

The poor wretches are frequently compelled to sing also; but when they do so, their songs are generally, as may naturally be expected, melancholy lamentations of their exile from their native country.

…On board some ships, the common sailors are allowed to have intercourse with such of the black women whose consent they can procure. And some of them have been known to take the inconstancy of their paramours so much to heart, as to leap overboard and drown themselves.

The officers are permitted to indulge their passions among them at pleasure, and sometimes are guilty of such brutal excesses as disgrace human nature.

The hardships and inconveniences suffered by the Negroes during the passage are scarcely to be enumerated or conceived. They are far more violently affected by the seasickness than the Europeans. It frequently terminates in death, especially among the women. But the exclusion of the fresh air is among the most intolerable.

For the purpose of admitting this needful refreshment, most of the ships in the slave trade are provided, between the decks, with five or six air-ports on each side of the ship, of about six inches in length, and four in breadth; in addition to which, some few ships, but not one in twenty, have what they denominate wind-sails.

But whenever the sea is rough and the rain heavy, it becomes necessary to shut these, and every other conveyance by which the air is admitted.

The fresh air being thus excluded, the Negroes’ rooms very soon grow intolerably hot. The confined air, rendered noxious by the effluvia exhaled from their bodies, and by being repeatedly breathed, soon produces fevers and fluxes, which generally carries off great numbers of them.

…One morning, upon examining the place allotted for the sick Negroes, I perceived that one of them, who was so emaciated as scarcely to be able to walk, was missing, and was convinced that he must have gone overboard in the night, probably to put a more expeditious period to his sufferings.

And, to conclude on this subject, I could not help being sensibly affected, on a former voyage, at observing with what apparent eagerness a black woman seized some dirt from off an African yam, and put it into her mouth, seeming to rejoice at the opportunity of possessing some of her native earth.

From these instances I think it may have been clearly deduced that the unhappy Africans are not bereft of the finer feelings, but have a strong attachment to their native country, together with a just sense of the value of liberty.

And the situation of the miserable beings above described, more forcibly urges the necessity of abolishing a trade which is the source of such evils, than the most eloquent harangue, or persuasive arguments could do.

Describe the travel conditions of slaves during their middle passage. Was there any difference between the treatments of the two genders?  Explain.

What happened when a slave refused to eat? Explain.